Objectives
The objective of this assignment is:
• To assess your overall understanding of Architectural Design Views. • To help you understand the Functional and Non-Functional Requirements. Note • This Assignment is a Graded Assignment. • The assignment should be in .doc format. Assignment in any format other than MS Word format will not be accepted. • Assignment submitted through email will not be accepted. • This assignment is covering Architectural Designs Lectures 23-26 • Recall the lectures delivered for Architectural Views and solve your assignment.
For any query about the assignment, contact at cs504@vu.edu.pk Scenario Description :
In a very famous Option restaurant, they followed a specific system to speed up the preparation of meal.
The manager provides table to the customer either directly or by call reservations. Each table assigns a number plate when it is reserved. A device is place in the table. It has three functions i.e. Call, Take Order, Pay Bill. If we press Call button then manager comes to the assigned table to resolve any issue regarding seating.
If we press Take Order then waiter takes order in a Notebook (a list of dishes and drinks ordered by the diner or group of diners). Waiter must know that dishes that have been ordered are available or not. The system must confirm the availability of dishes. If the dish not available then waiter should ask to change the order. Dishes to be prepared are sent to the kitchen and drinks to the drink bar. Starters and main course orders are usually taken together. Drinks and desert orders may be taken separately.
If we press Pay Order then we can pay our bill as cash or by credit card to the waiter. The system also keeps track of the numbers of customers served by each waiter management can view these statistics. Kitchen staff sees the dish orders on their screen and then prepare them in a proper sequence and confirm preparation to the system when complete, similarly with the bar. The Restaurant is open for 24 hours to serve the customers, for this, the owner of the Restaurant wants that system should remain available all the time. Also, he has some concerns regarding payment transactions from customers using the system. When a waiter sees the completion indications on his terminal he collects the item and then serves to the related table number.
Note: Above is the scenario that you have gone through in assignment #2, where it was asked to provide “Functional Requirements of the system”. For assignment #3 we will use the same scenario to develop “ Architecture ” of the system. (Assignment has two pages)
Question: 1 10 Marks
Draw architecture of the functional requirements of the system (also known as Object/class diagram). This architecture is a “VIEW” for developers, designers and software engineers as well. In this architecture you should focus on functional parts (classes) of the system, identify and highlight the relationship among those parts.
Question: 2 10 Marks
For Non-Functional requirements like Availability, Security and Performance, what do you suggest to provide a “VIEW” to System Engineer/Quality Assurance Cell? In other words what are the justifications that your system should be secure, available all the time and good performance and how to achieve security, availability and performance (just give strong clue/points).
Note:
Assignment should be in your own wordings not copied from net, handouts or books.
Your answer should be “to the point”.
We wish you very best of luck for your Assignment.
The deadline for Assignment no 3 submission of the course CS504 is February 16, 2015

This assignment statement is same as Assignment no :2

but questions are different

i need solution guide of assignment plz any one

plz any one upload

The class diagram is a static diagram. It represents the static view of an application. Class diagram is not only used for visualizing, describing and documenting different aspects of a system but also for constructing executable code of the software application.

The class diagram shows a collection of classes, interfaces, associations, collaborations and constraints. It is also known as a structural diagram.

The purpose of the class diagram is to model the static view of an application. The class diagrams are the only diagrams which can be directly mapped with object oriented languages and thus widely used at the time of construction.

The UML diagrams like activity diagram, sequence diagram can only give the sequence flow of the application but class diagram is a bit different. So it is the most popular UML diagram in the coder community.

So the purpose of the class diagram can be summarized as:

How to draw Class Diagram?

Class diagrams are the most popular UML diagrams used for construction of software applications. So it is very important to learn the drawing procedure of class diagram.

Class diagrams have lot of properties to consider while drawing but here the diagram will be considered from a top level view.

Class diagram is basically a graphical representation of the static view of the system and represents different aspects of the application. So a collection of class diagrams represent the whole system.

The following points should be remembered while drawing a class diagram:

Now the following diagram is an example of an Order System of an application. So it describes a particular aspect of the entire application.

So the following class diagram has been drawn considering all the points mentioned above: 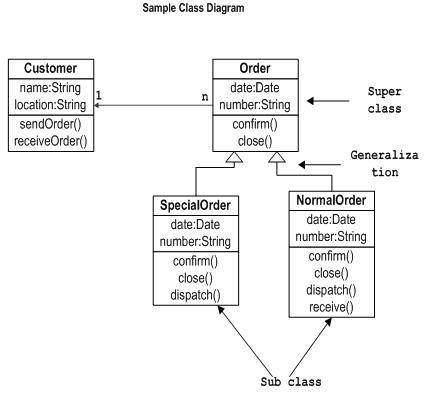 Where to use Class Diagrams?

Class diagram is a static diagram and it is used to model static view of a system. The static view describes the vocabulary of the system.

Class diagram is also considered as the foundation for component and deployment diagrams. Class diagrams are not only used to visualize the static view of the system but they are also used to construct the executable code for forward and reverse engineering of any system.

Generally UML diagrams are not directly mapped with any object oriented programming languages but the class diagram is an exception.

So in a brief, class diagrams are used for:

koi solution file upload kr skta hai ? i was sick i couldnt make my assimgment , am still sick i can not concentrate on.. kindly help.

Ammara Sabir replied to + ₱ɆⱤ₣Ɇ₵₮ ҉S҉M҉O҉K҉ER ⱫɆⱠⱠłsH ♥♥'s discussion and what about u????
53 minutes ago