Imran Khan PTI new Marriage news and ties knot with journalist pics, images, photos,, LAHORE: Pakistan Tehreek-e-Insaf (PTI) chairman Imran Khan has tied knot with a journalist who works for a British organisation, reports say.
A few close friends of both personalities knows that they have tied knots with each other, reported a local newspaper. 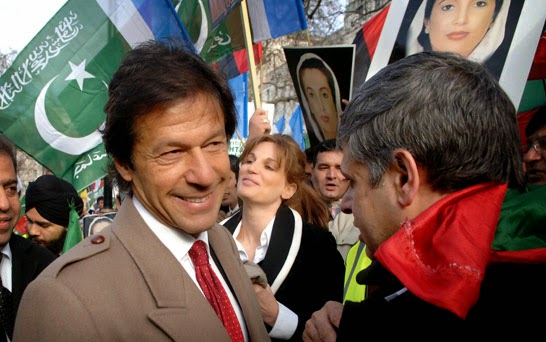 The official announcement of marriage is expected to be made in January, it said.
Such rumours regarding Imran Khan’s marriage have been made several times in the past.
It is pertinent to mention here that Imran Khan has announced several times that he will get married in ‘Naya Pakistan’ during his 126 days long sit-in in Islamabad.
Pakistan’s controversial actress Meera has expressed her desire to get married with PTI chairman.

ISLAMABAD – Imran Khan’s ‘new bride’ can change the internal balance of PTI as she demands for designation in PTI resulting the big changes in its leaderships, learnt from strong yet not confirmed reports.
Chairman Pakistan Tehreek e Insaf Imran Khan is reported to marry again after the divorce of his firstwife Jemima Khan but the ‘new bride’ is said to be a political partner of Imran Khan also as she demands for designation in party.
Imran Khan’s new marriage will may shift the balance of political leadership away form Imran Khan if she really ask for big designation in party. By replacing the existing leaders it is difficult to honor Imran Khan’s ‘to be bride’ with party designation.
// <![CDATA[
(adsbygoogle = window.adsbygoogle || []).push({});
// ]]>
Earlier it was asked by an anchor to Imran Khan about his decision of marriage but Imran khan neither nodded nor denied.
However in an interview with an Anchor Mehar Bukhari Imran Khan openly refused all rumors of his marriage until he makes Naya Pakistan.
Imran Khan’s marriage news are making headlines for the past couple of months however no official statement given by Imran Khan at any forum.