Most of the ning's members definitely know about the Bermuda triangle.and surely they have searched about it . before it we start discussion about it let me clear u about it

The Bermuda Triangle, also known as the Devil's Triangle, is a loosely defined region in the western part of the North Atlantic Ocean, where a number of aircraft and ships are said to have disappeared under mysterious circumstances.

Recent Aircraft and Boat Disappearances According to Bermuda-Triangle.org, around 129 planes have disappeared over the waters in the Bermuda Triangle between 1945 and 2008. After 2008, documented cases of unexplained aircraft disappearances in the area simply seem to stop, which deepens the mystery of the Bermuda Triangle even more. Detailed information about aircraft disappearances that occurred during World War II and shortly afterward can be found from numerous sources, as these events have become legendary in the unexplained and paranormal world.

Possible Reasons for the Recent Lull in Bermuda Triangle PhenomenonA plausible theory as to why the strange phenomenon of missing vessels and aircraft has literally become a thing of the past may be the technological advances in navigation, including GPS (Global Positioning Systems). It could also be possible that the danger zone has somehow moved. 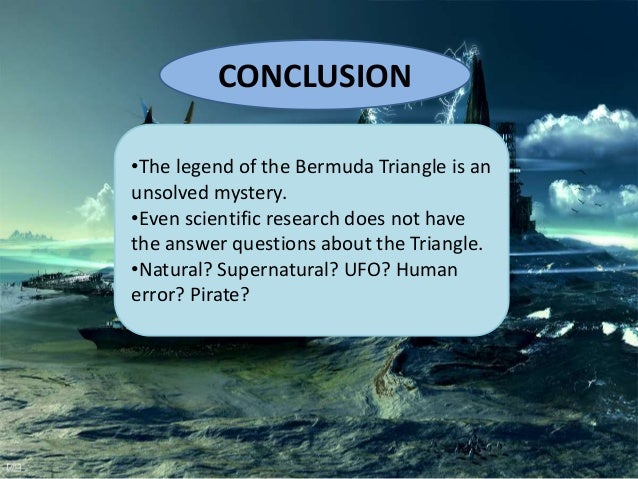 i m Science student  i searched about it in detail ....... so i can't believe about the concept of "the presence Dajal" here. Most of the people believe  that Dajal is present here ... its not true according to me  ,,,,,, as we know that everything has center it have great magnetic power in its center  so may be there  is some magnetic power that attract everything towards it.......

so what's  your  opinion about Bermuda triangle ??????

Nothing could be proved so far about Bermuda Triangle, there are a lot many assumptions about presence of Dajjal, Yajooj Majooj, etc. Even if it is believed there are some magnetic powers, the reason of such powerful force could not yet be determined. Finally its mystery could not be resolved till date. All the things we know are unproved theories.

There have been many stories about this mysterious, In the past whenever it case have been open for more explorations/prediction however after detailed deliberations early windup and remained not comprehensive not consolidated decision. Many discussions and Meetings have been arrange and also provides the opportunity to all enthusiastic participants for participation in this dicsussion actively but got nothing and still it mysterious land is question mark at all decision maker of the world. Thousands and Billions of Dollers have been spends also too much  expensive technology is used to determine but still fact is under procastination.

But many ppls believes incloding me this mysterious land is under the pocession of Hazarat Imam Mehdi A.s.

its All about magnetic force... and the 2nd things is about gravity.... in this triangle , the magnetic force is greater, and the force of gravity is about 1000 times greater then Normal force....!!!

yes exactly this is s a main reason