What is Shabaan? Virtues,Fasting and 15th night of Shabaan

It is admitted fact that every moment, second, minute, hour, day or night that is spent in the submission of Allah Almighty and His Beloved Prophet (SAW) is exceedingly meaningful and precious. But there are some days, nights and months which have their own weight and Allah, the compassionate, lays immense stress upon them to unveil their importance to his rationale creatures.

Among those months, those hold much importance is Sha’ban and the holy month of Ramadhan, The Holy Month of Sha’ban is one of the blessed months that holds much too for us from the mercy, compassion and kindness of Allah Almighty. Sha’ban is the name of the (eigth) month of the Islamic lunar calendar, and it is so called because in this month the Arabs used to disperse (tasha’aba) in search of water, or it was said that it is so called because it sha’aba (branches out or emerges) i.e., it appears between the months of Rajab and Ramadan.

HADITHS ABOUT THE NIGHT OF 15TH SHABA’AN

Apart from fasting in the month of sha’ban that has been proved authentic by above narrations, there is a concept of Laylat al-Nusf min Sha’baan (the 15th of Sha’baan). Which infact is like any other night, and there is no sound report from the Prophet (peace and blessings of Allaah be upon him) to indicate that on this night the fate or destiny of people is decided.

It was narrated from Abu Moosa al-Ash’ari that the Messenger of Allaah (peace and blessings of Allaah be upon him) said: “Allaah looks down on the night of the fifteenth of Sha’baan and forgives all his creation except a mushrik or one who harbours hatred against the Muslims.” Narrated by Ibn Maajah, 1390.

The Holy Prophet (sa.) had said that during the night of 15th Shaba'an the Almighty takes decisions in the matters of sustenance, life and death and welfare of the people. Next to the “Night of Qadr” the night of 15th Sha’baan is the most auspicious night (also known as “night of Baraat”). According to the Imams Muhammad bin Ali Al Baqir (as.) and Jaa’far bin Muhammad As Sadiq (as.) Allah swt has promised to fulfill every legitimate desire put forward to Him tonight. During this night Allah (swt) bestows on HIS people from HIS bounty & forgives them out of HIS grace & generosity .Of the blessings of this night is that ,at the dawn of this night ,was born the Leader of the Time Imam Mehdi (atfs) in Samarra -Iraq in the yr 255 AH . 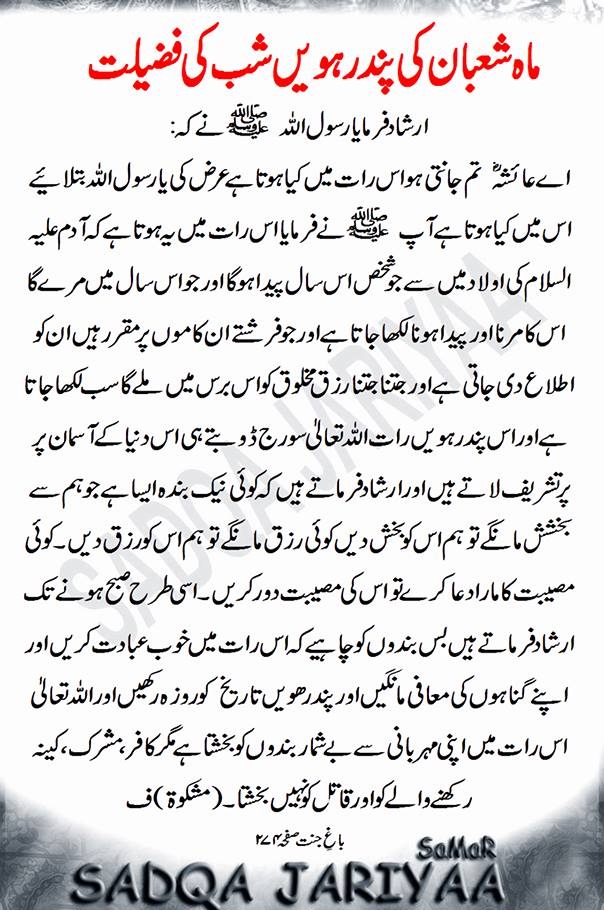 Kindly give me reference from Quran or from hadith .

Permalink Reply by Ѽ Gracious Heart Ѽ on June 2, 2015 at 8:44pm
If you dont mind please tell me What is your maslak ?

and for reality of these hadeth ... read this post.