My today paper of cs 504 (26 august 2015)
Some MCQS was form past but not all……………
Q1: Difference between the White box and Black box?
Q2: participant of Observer pattern?
Q3: Write any 3 side effect or the defect that can occur during the lifecycle of the developing of a program?
Q4: Write 3 guideline that can avoid the hazard caused by the side effect ?
Q5: Write one advantage and one disadvantage of the bit field?
Q6: “If someone test the program himself “
What type of the testing is suite for it 1) unit testing 2) system testing?
Q7: If there is large and complex system then it will divide into the subsystem to solve it easier
What type of the pattern will be use for this?
Q8: If user login (with name and pass word) the log manager will check the user name and password
What pattern will be use for it?
Q9: Write about White box testing scheme?
Q10: Which testing scheme has the same path in the statement coverage, Branch coverage and the path coverage?
Q11: Is it possible that a program is verifiable but not valid and is correct program?

As, good testing involves much more than just running the program a few times to see
whether it works or not. A good tester carries out a thorough analysis of the program to
devise test cases that can be used to test the system systematically and effectively.
Problem here is how to develop a representative set of test cases that could test a
complete program. That is, selection of a few test cases from a huge set of possibilities.
What should be the sets of inputs that should be used to test the system effectively and
efficiently?
Q4.
What is formule to calculate the total number of paths in a loop containing a single branch statement...? (2)
Q5.
Patterns are classified into how many catagories.? Write names all of them..? (3)
Q6.
Mention any two guidlines which you think neccessry to write "comments"...? (3)

Q7.
Difference between black box and white box?? (5)
Ans:
Black box testing
In this type of testing, a component or system is treated as a black box and it is tested for the required behavior.
This type of testing is not concerned with how the inputs are transformed into outputs.
As the system’s internal implementation details are not visible to the tester.
He gives inputs using an interface that the system provides and tests the output.
If the outputs match with the expected results, system is fine otherwise a defect is found.
Structural testing (white box)
As opposed to black box testing, in structural or white box testing we look inside the system and evaluate what it consists of and how is it implemented.
The inner of a system consists of design, structure of code and its documentation etc.
Therefore, in white box testing we analyze these internal structures of the program and devise test cases that can test these structures.

Q8.
Hazard caused by side effects?/? (5)
Ans:
If the following guidelines are observed, one can avoid hazards caused by side effects.
1. never use “,” except for declaration
2. if you are initializing a variable at the time of declaration, do not declare another variable in the same statement
3. never use multiple assignments in the same statement
4. Be very careful when you use functions with side effects – functions that change the values of the parameters.
5. Try to avoid functions that change the value of some parameters and return some value at the same time.

Q9.
Paticipents of observer petterns...? (5)
Ans:
Subject
• Knows its observers. Any number of Observer objects may observe a subject.
• Provides an interface for attaching and detaching Observer objects.
Observer
• Defines an updating interface for objects that should be notified of changes in a
subject.
ConcreteSubject
• Stores state of interest to concreteObserver objects.
• Sends a notification to its observers when its state changes.
ConcreteObserver
• Maintains a reference to a ConcreteSubject object.
• Stores state, state that should stay consistent with the subject’s.
• Implements the Observer updating interface to keep its state consistent with the subject’s. 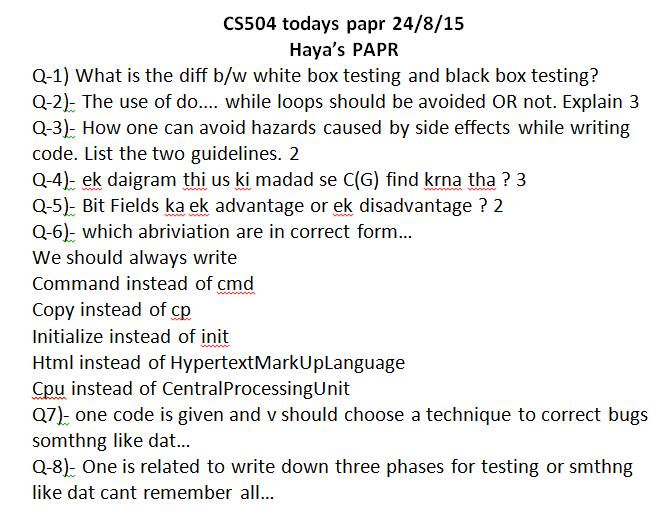 2----------which of the following are correct tieh reference to the abbreviation rules or humans convention
We should always write.
Command instead of and
Copy instead of cp
Initialized instead of int.

Q-3)- How one can avoid hazards caused by side effects while writing code. List the two guidelines.  2

Q-8)- If tester gives u test report of bugs in the software how u remove bugs write steps. 5

overall paper was so easy

A diagram was given we have to find C(g)