What UniLever is?
Unilever is dedicated to meeting the everyday needs of people everywhere. Around the world UniLever foods and home and personal care brands are chosen by many millions of individual consumers each day. Earning their trust, anticipating their aspirations and meeting their daily needs are the tasks of UniLever local companies. They bring to the service of their consumers the best in brands and both UniLever’s international and local expertise.
For more than 70 years Unilever has been providing consumers with quality products and services. UniLever has a portfolio of global, regional and local brands. Some, such asBertolli, Dove, Hellmann’s, Lipton, Lux, Magnum, Omo and Vaseline, are popular around the world. Others are the first choice for consumers in particular countries. As traditional structures and lifestyles around the world are being rapidly transformed, Unilever continues to respond to consumers’ present needs and, at the same time, to anticipate their future ones. Our strength lies in the deep understanding we have of local culture and markets. Unilever’s strategy is to focus research and development and marketing on our top performing brands, that is, those that are most in demand from consumers. Through our extensive knowledge of trends identified today, we will continue to develop our brands to meet the needs of our consumers tomorrow. , feel and smell great.


1: We are the leading consumer product company in Pakistan, a multinational with deep root in country.
2: We attract and develop high talented people who are excited, empowered and committed to deliver double digit growth.
3: We serve every day needs of all consumers every where for food, hygiene and beauty through brands products and service that deliver the best quality and value.
4: We strive to remain and every simple and enterprising business.
5: We use our superior consumer understanding to products breakthrough innovation in brand and channel.
6: Our brands capture the hearts of consumer through outstanding communication.
7: Through managing a responsive supply chain we maximize value from supplier to customer.
8: We are exemplary through our commitment to business ethics, safety, health, environment and involvement in the community
Statement of Chairman& Chief Executive of Lever Brothers Pakistan Limited
“ I am quite convinced that 2002 is poised to be a passionate year for us, which is why we should reflect on some exciting possibilities it has to offer:

The challenge for us is to liberate our energies to help grow our business, and to lead and deliver the results that we have committed ourselves to. I would encourage everyone to believe in and grasp the “art of possibility” and focus on the Must Wins for our business.”

· OFI – Opportunity For Improvement
· Always looking for improvement.
· The continuous improvement of all services through total involvement of all employees.
· The developing and the strengthening of partnership with external and internal customers and suppliers.
· Providing innovative and higher quality products and services to achieve total customer satisfaction by understanding their requirements and anticipating their future expectations or needs.
FUNCTIONS
· Monitoring annual targets for quality improvements in all areas.
· Creating a culture of customer focus striving to become the lowest cost producer through agreed annual cost reduction program.
· Value people by understanding and drawing upon their strength i.e. abilities and knowledge and make efforts for their training and development.
STAGES
RAW MATERIAL:
When raw material is received the quality of raw material is inspected according to the standards. According to these standards if the personnel of receiving department will inspect according to the standards. If there are a lot of 500 and they choose 13 samples from the whole lot then they select the sample from the upper and lower and right and left side of the whole packet. It means that they select the sample by way of diversifying the area. If the 2 units of the sample are rejected then the whole lot will be rejected and if the lot is rejected then they call back the vendors and vendor check that lot again. If the lot is very much needed by the production department then they place a written request. The 100% inspection is done on it. In this case, they call the vendors or their inspectors and they check it on 100% basis. But this happens in very rare cases.
On the other hand if the lot is accepted then it is remarked as GRL (good received lot) and sent to the store. While four copies of GRL are made and sent to the following four departments:
1. Purchase Department
2. Quality Control Department
3. Store
4. For computer entry
DURING THE PROCESS:
When the product is in-line then quality inspector check it at every stage of process. If these inspectors will sign it for next process then product will go for next process. If they do not sign it then the work will stop. Then for the accepted and rejected production, the quality inspector will give report. This report has also included the sign of supervisor of process area. So that analyzing the rejection and acceptance %age for next rectification and improvement.
Then report will pass to the production manager so on this base they can make the weakly and monthly report. And it will pass to the top management. In this inspection is done at every stage and will pass towards the top management. The ISO has given them standard for the whole process. It also includes the initial cost but the running cost is more safe and effective because the chances of rejection are reduced. We can say that the chances of rejection will be controlled. In this way the quality level is much improved and it reduces the customer complaints. Monthly charts are also made and management also takes correction actions.
If there is a need of corrective action then they will request. The immediate action will be taken on that form and until the corrective action will not be taken they production level will be ceased.
Quality control department has given their dimensions. And if there is any deviation from these dimensions then even the MD of the company cannot start the production. And charts are also following these dimensions everywhere in the production area.


Sales:
The company's revenue streams are reported under three heads: foods, beverages, and detergents (including personal-care products). The foods group covers brand names 'Dalda Banaspati' and 'Planta' cooking oil, and 'Walls' and 'Polka' icecream. The beverages group covers brand names 'Lipton' and 'Brooke Bond Superme' tea. The detergent covers 'Surf' and 'Vim'. Personal care products includes 'Lux', 'Lifebouy' soap and 'Sunsilk' shampoo.
During 1H01 the company introduced new food packagings which resulted in greater volumes. The icecream units did well because of enhanced product visibility made possible by door to door mobile vending. The overall sales under foods head improved by Rs. 22m (1H01: Rs. 2,612, 1H00: Rs. 2,590).
Lipton Yellow Label is the principal brand alongwith Brooke Bond Supreme in beverages. The biggest threat to its growth comes from smuggled tea, available at 30-40% below company product prices, due to evasion of import duty and sales tax. The recent move to increase import duty from 25% to 30% is likely to benefit tea smugglers only. The policy makers needs to realise that its overall revenue from tea imports increased significantly in 1998 when the duty was reduced from 30% to 25%.
On the other hand if conserving foreign exhange and encouraging local cultivation of tea are the motivations behind the increase in import duty then the best course of action for the company is to redouble its efforts in local cultivation of tea in Manshera, where the President Musharraf formally inaugurated the facility on 7 September 2001. However the sheer whimsical adhocism of bureaucracy can hardly be pardoned on these grounds.
The sales in beverages decreased by Rs. 111 m (1H2001: Rs. 4,099, 1H2000: Rs. 4210). We expect sales to improve only moderately in this category in the 2H01 without much contribution to the bottom line.
Lastly, detergents are facing stiff contest from 'Ariel' of rivals Procter & Gamble (an important fact not mentioned in Chairperson's review). The personal care products also take a pinch from products of other Unilever group companies in Middle East. Given the lack of 'be Pakistani, buy Pakistani' ideology in end-users, the personal care products are smuggled in huge quantities and enjoy the benefit of being exempt from sales and other taxes, but the fact is not overtly highlighted in chairpersons' report. The sales in detergent and personal-care group for 1H01 decreased marginally by Rs. 15m (1H01: 2,932, 1H00: 2,917). We expect sales to increase only moderately in this category in the 2H01.
Rebates & Allowances.
During the six months period ending 30th June 2001 the gross sales of the company was greater than the corresponding period but the rebates and allowances showed an increase of Rs. 93m from Rs. 330m in 1H2000 to Rs. 423m in 1H2001.
Earning Per Share.
The improvement in eps is noticeable. In 2H00 the eps scaled new heights, unlikely to be matched or surpassed in the current 2H01. This is further confirmed by Ms. Musharaf Hai, Chairman and Chief Executive in her candid review when she says: 'current economic environment and uncertainty...may slow down revenue growth and profitability in the second half'. We believe that the eps for the current half will be in the range of Rs. 40 to 55. The target eps is expected to be around Rs. 50.
Dividends & Payout.
From shareholder's point of view, the final dividend announcement of Rs. 83 per ordinary share on 20th March 2001 was an unexpected but pleasant surprise. The presence of distributable reserves of Rs. 604 m makes it possible for the company to maintain final dividend at last years' level but such feat is unlikely to be repeated for atleast next couple of years. However the strong payout of the company (row 10 above) is worth noticing.
Consistently Improved Margins.
The most important thing to observe is that the company has been able to improve its bottom line, indicated by net profit margin (row 7), which considering only 6% growth in revenues from 1999 to 2000 is an achievement, the basic reason for which is the improved cost control.
Cashflows.
Another important factor (not detailed in above table because of space limitations) is that the company has recorded significant cash earnings after a long time, which is good news for its shareholders. As a result, the overdrawn balance has gone down by Rs. 166 m, from Rs. 194 in 2H00 to Rs. 28 m in 1H01, which is no mean achievement. The half-yearly accounts of 2001 also show that Rs. 1 billion is payable by the company in the next twelve months, which will be a drain on its cash resources but given the ability of the company to borrow funds at reasonable financial charge from elsewhere, this too will pass. The company as a fast mover of consumer goods needs to carry heavy inventory but gladly it has been able to control its inventory, and receivables properly. The role of creditors as a source of financing is also significant. Creditors etc have balloned considerably by Rs. 719 m from Rs. 2,353m at 2H00 to Rs. 3,072 m in 1H01. Creditors etc are almost 150% of the net assets and it sure is an indication of over-trading. The level of creditors etc needs to be bought down
Stock Chart
. 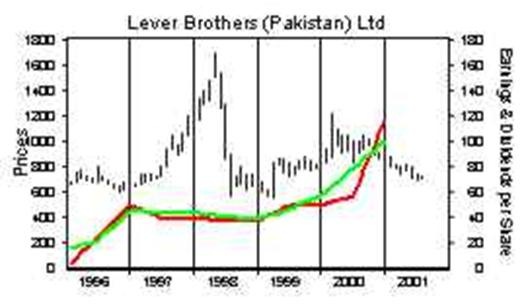 + + updated their profile
2 hours ago