Dr. Raymond Damadian, a physician and scientist, toiled for years trying to produce a machine that could noninvasively scan the body with the use of magnets. Along with some graduate students, he constructed a superconducting magnet and fashioned a coil of antenna wires. Since no one wanted to be the first one in this contraption, Damadian volunteered to be the first patient.

When he climbed in, however, nothing happened. Damadian was looking at years wasted on a failed invention, but…

The crossbow, a weapon popular with Wookiees, vampire slayers and some modern hunters, looks like a cross between a bow and a rifle. Like a bow, it uses a fast-moving string to launch projectiles, but it also has a trigger and a stock, like a rifle. Based on these similarities, some people may think that the inventor of the crossbow took pieces from a rifle and attached them to a bow.

But crossbows have been around much longer than guns have. Archeologists have found crossbows in…

Gyroscopes can be very perplexing objects because they move in peculiar ways and even seem to defy gravity. These special properties make ­gyroscopes extremely important in everything from your bicycle to the advanced navigation system on the space shuttle. A typical airplane uses about a dozen gyroscopes in everything from its compass to its autopilot. The Russian Mir space station used 11 gyroscopes to keep its orientation to the sun, and the Hubble Space Telescope has a batch of…

What do a wrecking yard, a rock concert and your front door have in common? They each use electromagnets, devices that create a magnetic field through the application of electricity. Wrecking yards employ extremely powerful electromagnets to move heavy pieces of scrap metal or even entire cars from one place to another. Your favorite band uses electromagnets to amplify the sound coming out of its speakers. And when someone rings your doorbell, a tiny electromagnet pulls a metal clapper…

10 Surprising Ways to Use Honey

Honey is one of the most wonderful foods in nature and there are many great ways to use it. I’m a huge honey lover. I enjoy honey in my tea, smoothies, and drizzled on top of peanut butter on toast. Recently I’ve decided to learn more about different uses of honey. I was surprised to find out that there are so many unusual ways to use this healthy food. Without further ado, here are a few surprising ways to use honey. Take a look, see what you think and be sure to try a few of these…

8 Most Beautiful Island Countries in the World

20 Most Peaceful Countries in the World

Denmark tops the list of the most peaceful countries on Earth since it’s really a safe place to live. Even while Copenhagen, the capital of Denmark, was under occupation by the Nazis during the World War II, it still did not fight. UK-based artist Robin Wight uses stainless steel wire to form stunning, dramatic sculptures of winged fairies dancing in the wind. The enchanting forms, which range in size from miniature to life-sized, seem to have a life of their own as they strike dynamic poses, contort their bodies, and hold onto windswept dandelions. Inspired by the light and colors of Los Angeles, artist Bradley Hankey used a combination of influences from photography and painting to develop these minimalist scenes. To produce each unique painting, a collection entitled #instalite #losangeles, Hankey first photographed around L.A. and then used digital filters to alter the light and to generate a vintage feel. The… As part of National Geographic's Your Shot photo community, Japanese photographer Hidenobu Suzuki submitted the image above he calls Sleeping Giant. Taken after a heavy rainstorm, the photo shows Mount Fuji looming over Fujinomiya, a city located in the Shizuoka Prefecture of Japan. Impressed by the beautiful colors he writes, "When I took the photos in a breathless silence, I had a… Tasked with the challenge of creating an environment inside an international shipping container for the 2013 , Japanese designers Masakazu Shirane and Saya Miyazaki created Wink Space, a mind-bendingly trippy tunnel similar to a giant kaleidoscope. The immersive installation was constructed with mirrors that formed a multi-faceted, reflective surface inside the… 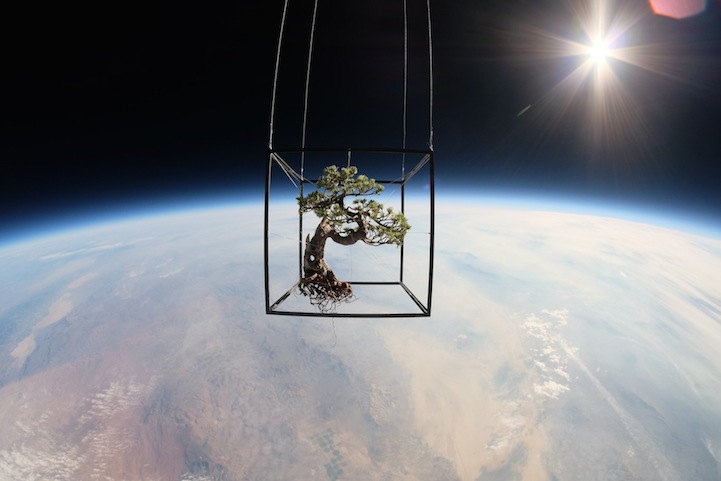 Japanese artist Azuma Makoto has worked with bonsai trees , but his newest botanical art project is out of this world—literally. On July 15, Makoto and his crew ventured to Nevada’s Black Rock Desert to launch two objects into space: "Shiki 1," a 50-year-old white pine bonsai suspended from a metal frame, and an untitled arrangement of orchids, hydrangeas, lilies, irises, and other… Many of us rely on digital clocks on computers or cell phones to determine the time of day but, with this gorgeous creation, German designer Meike Harde transforms that process into a more beautiful and meaningful experience.Time Is Dancing is a simple, round clock with a single ballerina on the front. The upper body and two legs are separate pieces that move and bend…

The sun sets on a field in southern England. When it rises again the following morning, that field has been transformed into an enormous work of art. A large section of the crop has been tamped into a pattern of circles, rings and other intricate geometric shapes. But who created it?

Are crop circles the work of alien visitors? Are they a natural phenomenon, created by electrically charged currents of air? Or are they elaborate hoaxes perpetrated by savvy, talented and very…

The Apache helicopter is a revolutionary development in the history of war. It is essentially a flying tank -- a helicopter designed to survive heavy attack and inflict massive damage. It can zero in on specific targets, day or night, even in terrible weather. As you might expect, it is a terrifying machine to ground forces.

In this article, we'll look at the Apache's amazing flight systems, weapons systems, sensor systems and armor systems. Individually, these…

From backyard log splitters to the huge machines you see on construction sites, hydraulic equipment is amazing in its strength ­and agility! On any construction site you see hydraulically operated machinery in the form of bulldozers, backhoes, shovels, loaders, fork lifts and cranes.

Hydraulics operate the control surfaces on any large airplane. You see hydraulics at car service centers lifting the cars so that mechanics can work underneath them, and…

Blessings updated their profile
1 hour ago