A lot of lakes in North America are named as Horseshoe Lake, but this one definitely deserves the name. It is an oxbow lake, of course with a horseshoe shape, derived from cutting off the wide meanders of Red River near Morris in Manitoba, Canada, which is not unusual in this area.

It is unknown if Fisheating Creek hides some mysterious fish eater in its deeps, or the name derives from the bizarre shape. However, it could be anything. Whether it’s a fish eater, a bird, dragon, or maybe an alien, the zigzag river is nothing but strange one. You can enjoy this peace of nature in owbone March west of Florida’s Lake Okeechobee, widely known as The Big O.

The fishing community in Sao Paulo state in Brazil has decided to do fishery from a man-shaped lake. It’s unknown if this is part of some ritual of usually superstitious fishermen, but it’s obvious that they have gone through a great effort to reshape the lake. It is 140 meters long. 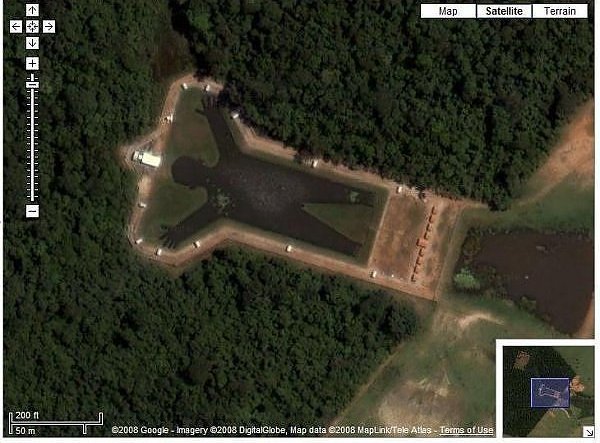 Eros Lake is located 1398 meters above sea level right below the Chembra Peak in India. The usual mountain mystics here is enriched with the wonderful heart-shaped lake, making very romantic ambient. Amazingly, it’s shaped only by nature. The temperature is quite tolerable, so it’s worth visiting, at least for Valentine’s Day.

Schulensmeer Lake in Belgium was artificially created in 70s when a highway was built in the area. When it was obvious that the lake could have interesting and unusual gun shape, parcels of land were brought for this purpose. Someone could suspect that Chuck Norris or Sylvester Stalone gave the idea, but it’s not very probable having in mind that the lake is used for peaceful purposes: surfing, sailing, kayaking and other water sports are the usual activities.

Nature created this bizarrely shaped lake near Mt McKinley in Alaska. It is very similar to astrological sign of Pisces. However, it’s not as famous as the horoscope. McKinley Mountain is too bulky and too attractive to watch, so this lake it’s not well known.

We’re back to horseshoes, but this time it’s not a lake. It’s almost an oxbow lake, anyway. This is amazing green colored meander of Colorado River, in the Glen Canyon National Recreational Area in Arizona. From the steep cliff above, it makes a wonderful sight.

There’s no list of bizarre things that could go without something “Made in China.” The crescent shaped Yueyaquan Lake near the city of Dunhuang, Gansu Province, is very small. Its depth in 1960’s was a maximum 7.5 meters, but it dramatically declined last years: now it’s only 1.3 meters deep. Due to its popularity between the tourists, who go there on camel tours, the local government decided to restore lake’s depth.

Peyto Lake is located in Canadian Rockies and its shape represents one of its inhabitants. From sky view it looks like a standing bear. The lake got the name from Bill Peyto, a trapper in this area. It is very attractive for photographers, not only for the shape, but for its breathtaking turquoise color.

We only know that it’s located somewhere in Poland. It’s shaped like the Latin letter A, but there’s where the alphabet ends for now, having in mind that “B” and “C” lakes couldn’t be seen in the area.