Few people know that ants have a real ability to kill and heavily influence the environment around them. They are one of the most successful species of organisms on the entire planet, having adapated to varying climates and locations in nearly all seven continents. Some have even evolved to develop wings.

The secret to success lies in numbers – huge numbers. Out of the 12,000 species of ants currently classified, these five make it to the top for being  the deadliest killer ants in the world.

“Fire ants (0.24 inches long) have been a widespread problem in the United States after they were accidentally introduced in the 1930s. Known for their large ant mound colonies and aggressive nature, they attack in swarms following pheromones released by the first ant’s sting. So if you are stung once, you are bound to get attacked by the entire colony if you can’t get away quick enough. Small animals such as birds and even larger mammals like newborn calves often become victims because they cannot escape in time before they are devoured en masse.”

“The Argentine ant (1/10 inch long) is highly social ant species, known for extensive organization of its colonies. In fact, the ants are so genetically similar that individual ants can walk into a range of nearby colonies without being killed for intrusion. Merged supercolonies are destructive, especially if near human settlements. The problem with Argentine ants is that they are among the world’s top 100 animal invaders, known for killing off competing ant species in non-native geographical areas, such as in Australia. In the article linked above, the scientists state that an Argentine ant supercolony thousands of miles wide can form across southern Australia if the native ants of that region have the same genetic makeup and behavior.“

“The ants march through the forests in groups of millions, eating anything that moves and severely impacting the local environment (even elephants run from them). The term “killer ant” usually applies to this species simply because of the magnitude of the colony sizes (over 20 million individuals). When in large transit, the ants travel in long columns on the forest floor, with the stronger class of ants on opposite sides flanking in ready position – jaws ready. They are so strong in fact, that you can tear the ant in two after it bit into your skin and its jaw will still be locked in position. In East Africa, emergency situations call for using the actual jaws of the Siafu ants as ‘stitches’, sealing off open wounds.”

“Even scarier is the numerous predatory skills they have compared to other ant species, such as excellent vision (they can spot and follow you from a meter away), highly painful stings that can cause anaphylactic shock in allergic people, and they are very aggressive to intruders, including humans. This combination makes them responsible for the deaths of people every year in Australia. 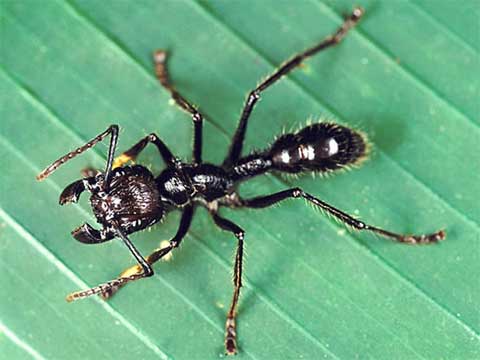 “Bullet ants of South America are known to have the most painful sting of insects on the entire planet, rated at the highest of the Schmidt Pain Index at 4.0+. The name of the ant is derived from the intense 24-hour pain the venom from the stings cause. Bullet ants are also giants, ranging from 18 to 25 mm long (1 inch). The venom is highly neurotoxin, causing excruciating pain when injected into mammal smooth muscle. When attacked, these killer ants release a musky order, swarm together to defend against the intruders, and literally grab and sting them to death.“