A replica of lahore fort in china

ISLAMABAD (December 21 2009): The construction of outer portion of the Pakistan pavilion building structure for Expo 2010 being held in Shanghai China next year has been completed. According to reports reaching here, a huge concrete building, constructed in front of China pavilion, is a replica of 'Shahi Qila', Lahore, and has become most popular building in the world's largest exhibition.

The Pakistan pavilion had been completed a few months before the commencement of the world's biggest and longest trade event to be held from April next year. "It is certain that Pakistan pavilion would bring a unique and highly attractive offering of culture, friendship and harmony to the visitors of Expo 2010 and all efforts shall be made from Pakistan side working along their Chinese brothers to make it a complete success", Consul-General of Pakistan Zafar Hasan expressed hope. The construction of pavilions of USA, UK, France, Russia and over 70 other countries is in full swing.

Close location of the Pakistan pavilion next to the Chinese pavilion signifies the strong bond between the two countries and the people of the two great nations. Commissioner General of Pakistan Abdul Wahid said that the fast construction pace of Pakistan pavilion would ensure that it is the first Asian country pavilion that is expected to be fully completed by the end of this year having all aspects and modern-day facilities.

While commenting on choice of the Lahore Fort as Pakistan's contribution to Expo 2010, Abdul Wahid said: "The Lahore Fort is symbolic of harmonious and positive contribution to diverse people such as the ancient Greeks, Persians, British and Muslims who all left their unique positive impressions during the various aspects of construction of the Lahore Fort over a period of 2000 years". He further said that "the Lahore Fort was also a symbolic representation of the strength, evergreen, time tested and harmonious relations between the people of Pakistan and China, which go back thousands of years from the time of the silk route where traders between the two areas frequently interacted with each other in a friendly and cordial manner."

The interior decoration and exhibition design of the Pakistan pavilion was also unveiled by Director Pavilion, Asad Wahid. He said "The theme of the Pakistan Pavilion, the largest ever built outside Pakistan follows the principle of the best city in the world being the one that offers the perfect blend of "harmony in diversity".

Asad told media persons that Pakistan pavilion would utilise the latest and cutting edge technology to inform the visitors of the high diversity in culture, religious, ethnic groups, practices, languages, faces, practices that are found in Pakistan. He said that Pakistan is the only country in the world that can boast diverse culture, heritage and monuments from different world civilisations such as that from the Greek, Persian, Turkish, Afghan, Arabic civilisations, to name a few. Furthermore, Pakistan has some of the most holy religious sites of Muslim, Hindu, Sikh, Christian and Buddhist religions.

Asad Wahid also said that various aspects of Pakistan's culture, economy, geography, investment and trade opportunities as well as Pakistani cuisine would be presented to the visitors to the pavilion in a way that leaves the most positive and lasting impression on every attendant of the Expo. He said that traditional handicrafts that are typical of Pakistan and very exotic would be given to the visitors to make sure that they take home an everlasting good memory of their visit to Pakistan pavilion at Expo 2010.

Zafar Hasan, Consul-General of Pakistan in Shanghai, present on this occasion, said that Pakistan and China enjoy an all-weather and time-tested friendship. He praised the management of the Expo 2010 for extending every possible help and support.

Very authentic and beautiful structure, simply brilliant!
I found these pictures on the net.

The Pakistan Pavilion, which will face the Chinese Pavilion, will create a replica of the Lahore Fort, an iconic symbol of the city of Lahore at the 2010 Expo.

The fort which dates back to the year 1025AD is the cultural capital and heart of modern-day Pakistan. It was given its current design in 1566AD. The building is listed as a UNESCO world heritage site.

Themed "harmony in diversity," various aspects of the best of Pakistan's cities will be merged into one showcase of culture, tradition, modernity and history.

In the pavilion, visitors will be able to experience the life of a typical Pakistani citizen through detailed visual and multimedia presentations. 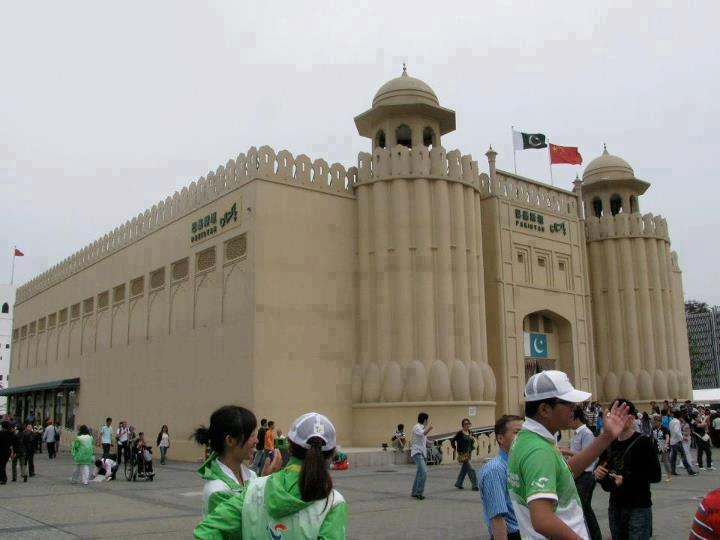 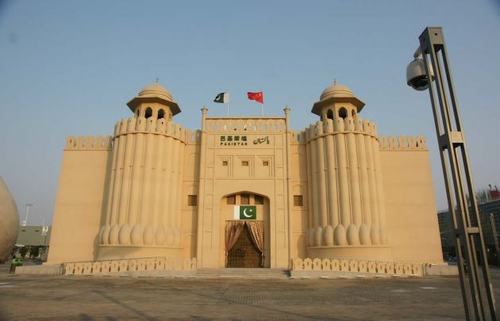