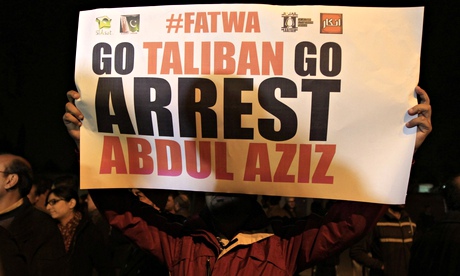 A man holds a sign during a protest near the Red Mosque in Islamabad on Friday. Photograph: Faisal Mahmood/Reuters

Anti-Taliban protesters marched on a police station in Islamabad on Friday to demand an official investigation into a radical cleric who refused to condemn the killing of 132 schoolboys this week.

The second night of remarkably bold action by civil society groups came on a day of escalating military strikes against alleged militants and the first executions of convicted terrorists to be carried out in Pakistan for years.

As hundreds of people shouted anti-Taliban slogans and waved placards, a smaller group of protesters entered Islamabad’s Aabpara police station to file an application for a first investigation report – a formal document that triggers a police investigation – against Abdul Aziz, the head of the capital’s Red Mosque. They were alleging that peaceful protesters outside the mosque had been threatened with violence.

The cleric, who makes no secret of his admiration for terrorists, including Osama bin Laden, caused outrage earlier in the week by refusing to condemn the brutal attack by the Tehreek-e-Taliban Pakistan (TTP) on the army school in Peshawar.

For a second night protesters attempted to hold a vigil outside the gates of his mosque, but were prevented from doing so by a huge number of police who sealed both entrances to the street.

Despite the tense stand-off with Aziz’s supporters on Thursday, the size of the crowd had notably swelled to about 300, with some saying they had been too fearful to come to the earlier demonstration.

Others said they came after being angered by the registration of a first investigation report against some of the protest organisers, including Jibran Nasir, a young social activist and former parliamentary candidate.

“It clearly shows the administration is completely biased in favour of these mullahs,” said Sarwar Bari, a social activist.

“The administration and military establishment still have a soft corner for those Taliban who are exported to fight in Afghanistan and India.”

The Red Mosque was the scene of a deadly 10-day siege in 2007 between security forces and the followers of Abdul Aziz. The operation against the mosque caused such outrage in jihadi circles that it led directly to the formation of the TTP.

While Aziz has been able to preach and enjoy a high public profile in recent years, extremist clerics regarded as Taliban apologists have come under sharp criticism following the Peshawar attack.

That public anger has also forced the country’s military and civilian leaders to adopt a tough new stance against the TTP, with at least 77 alleged militants killed in operations around the country.

The military said its ground forces killed 10 militants late on Thursday, while air strikes killed another 17, including an Uzbek commander.

Another 32 alleged terrorists were killed on Friday by security forces in an ambush in Tirah valley in the Khyber tribal agency, an area adjacent to Peshawar, and troops killed 18 more militants during a “cordon and search operation” in Khyber, the military said.

In the southern province of Baluchistan, security forces killed a senior TTP leader along with seven of his associates in three separate pre-dawn raids, police said.

One was a former soldier involved in an attack on the army headquarters in 2009. Another, Arshad Mehmood, was part of a plot to assassinate former military ruler Pervez Musharraf.

Shuja Khanzada, the home minister for Punjab province, where the two men were hanged, told the Associated Press: “We have started these executions by hanging two terrorists. Today’s executions of terrorists will boost the morale of the nation, and we are planning to hang more terrorists next week.”

A government prosecutor said the state would appeal on Monday against the granting of bail to Zaki-ur-Rehman Lakhvi, the alleged mastermind of the 2008 terrorist attacks on the Indian city of Mumbai.

The decision by an anti-terrorism court to bail him had provoked a storm of criticism from India, particularly given the outpouring of Indian public sympathy for the victims of the Peshawar massacre.

India has long demanded action against Lashkar-e-Taiba, the terrorist group co-founded by Lakhvi that was responsible for the three-day assault on Mumbai by 10 young “fidayeen” suicide fighters in which 166 people died.

Legend of Punjabi ! This man is Hilarious .