The art of photography is more than capturing an orchestrated series of brilliantly-lit shots. Spontaneity and original content are equally important to the effectiveness of a photograph — something well-traveled photographers can attest to. Sometimes a photographer is capable of capturing the most magnificent shots of their lives on a whim. Without warning, something spectacular is caught! There are plenty of examples of these types of breathtaking photographs in this year's .

The 24th annual run of the contest has some spectacular images in the running under four categories: Travel Portraits, Outdoor Scenes, Sense of Place, and Spontaneous Moments. There are thousands of breathtaking nature shots, supreme architectural landscapes, and multicultural portraits to sift through online. While the judges are deliberating their winners, you can have a hand in crowning the winner of the  by voting online now. Don't wait because voting is officially closed on July 20, 2012. First, check out some of the outstanding entries, below.

Top photo: An adventurer climbs the frozen inner tombs of an ice cave on the north face of alpine summit at 3,800 meters above sea level. (Photographer: Kamil Tamiola) A hot air balloon passes through two giant columns of an iceberg near the Arctic Bay. (Photographer: Michelle Valberg) A massive mesocyclone supercell caught near the Nebrask-Kansas boarder on the night of June 22, 2012. (Photographer: Jennifer Brindley) A monochromatic aerial view of the spiraling staircase in the Vatican Museum. (Photographer: Syaza Mohammed Shakharulain) 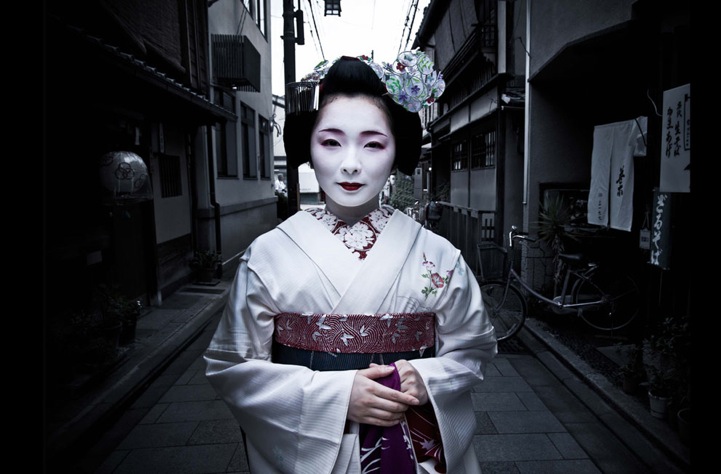 A maiko (or traditional Japanese geiko entertainer in training) in Kyoto named Toshimana has her picture taken. (Photographer: Seiya Bowen) 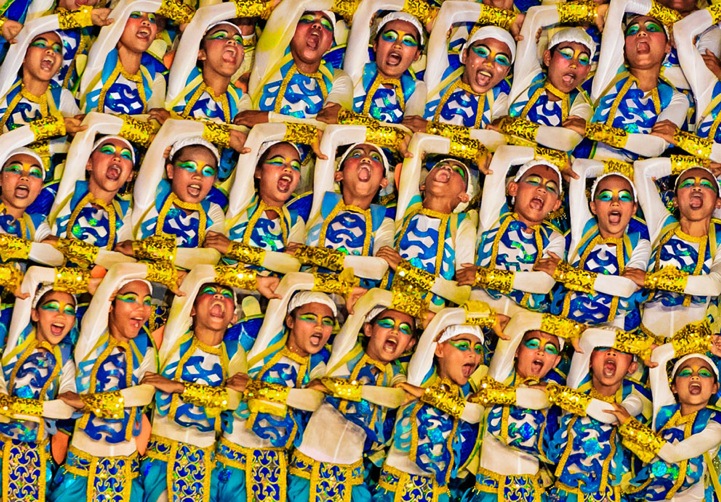 A bright formation of costumed children in the Philippines performing their routine in celebration of their beautiful coastlines at the Lapyahan festival. (Photographer: Erwin Choachuy) A stunning close-up of a village mayor's wife in Madagascar. (Photographer: Lisa Labinjoh) 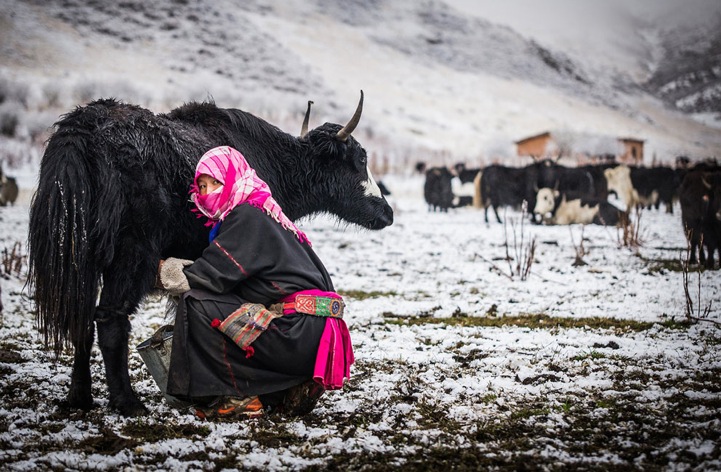 A nomadic woman milks a yak on the snowy grasslands of Sichuan, China. (Photographer: John Quintero) 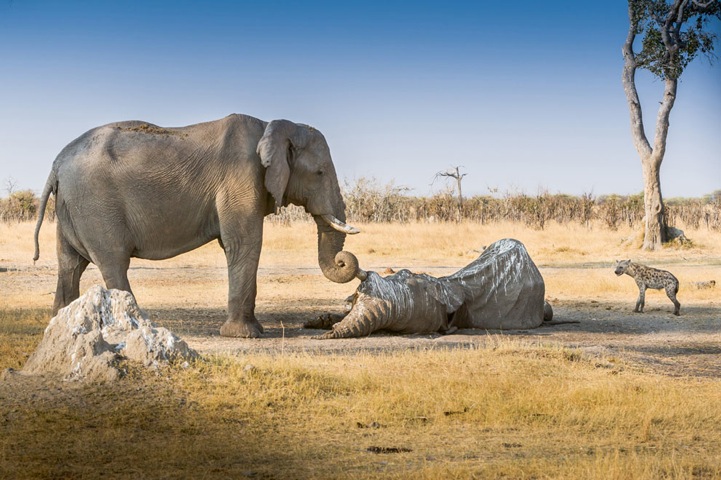 An elephant grieves the loss of its fellow friend, wrapping its trunk around the corpse's tusk, after successfully chasing away predators. (Photographer John Chaney) 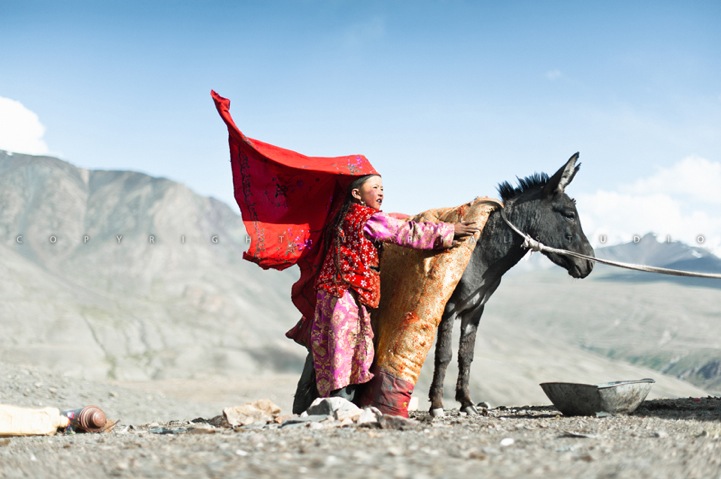 In Afghanistan, a young Kyrgz girl named Marbet readies her donkey for a 2-hour trip to school when a gust of wind catches her veil. (Photographer:Cedric Houin) A group of children joyously laughing inside a Jeepney in Cebu City, Philippines. (Photographer: Mac Kwan) 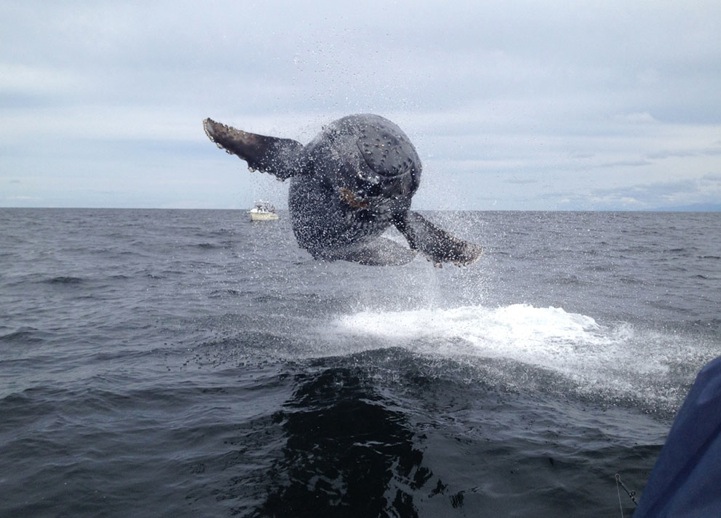 A baby humpback whale caught in mid-air while playing and jumping out of the water amidst boated fishermen in Tofino, British Columbia. (Photographer: Matthew Thornton) 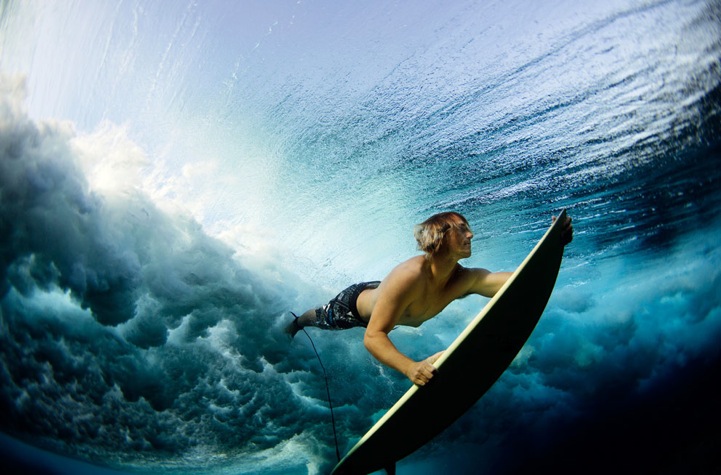 A surfer caught duckdiving his board as a wave passes overhead at Cloud Break in Fiji. (Photographer: Lucia Griggi)