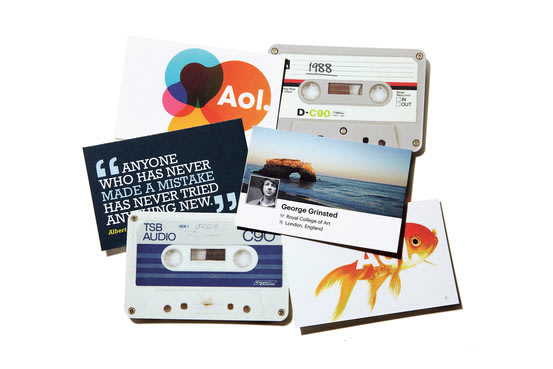 To read everything on Frank Zhao's business cards, you need a computer.

The 22-year-old computer programmer and biotech-company intern has cards made out of a standard, green circuit board. Plug the corner of one into a USB port, hit "caps lock" a few times and his information will appear on the screen.

"Anyone can use social networks," says the senior at the University of Waterloo in Canada. "Business cards are going to be around a while," Mr. Zhao says, adding that, for him, they "are a new way to make an impression." 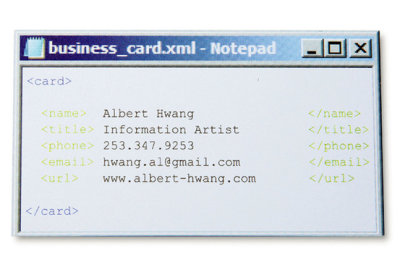 Many technology companies and entrepreneurs that deal with mostly virtual products are embracing the tactile business card. Cards are often the sole tangible representation of a person's virtual life. And as people amass more points of contact—website, email, @name, Facebook (FB)—the cards become a single carrier of all those details.

"You can't replace the simplicity of a piece of paper for sharing that info," says Albert Hwang, a 28-year-old digital artist in New York. The contact information on his paper cards is displayed as if it were computer text coding.

The cards themselves have become sophisticated marketing tools. Earlier this month, Tristan Mace, 22, helped launch a Web-based travel company called Want Me Get Me, which offers hotel upgrades to the young and tech-savvy. The company's business cards resemble hotel keycards. They were expensive to produce, Mr. Mace says, but already seem effective. "People email and say, 'I've kept your card on my desk,' " he says.

Specialty cards tend to cost more than the standard-issue cards, which, for large companies, can be purchased in bulk. Most large corporations still use basic cards: a batch with one color of ink printed on thin paper stock costs about $13 for 500 cards, says Michael Loughran, president of the print division of PowerOne Inc., which makes cards for many companies, including Dow Jones, publisher of The Wall Street Journal.

Mr. Loughran says start-up companies increasingly are ordering more elaborate cards that incorporate USB connections and other imprints of e-connectedness, with so-called QR codes that can be read by smartphones. "Cards with QR codes are going crazy," he says. 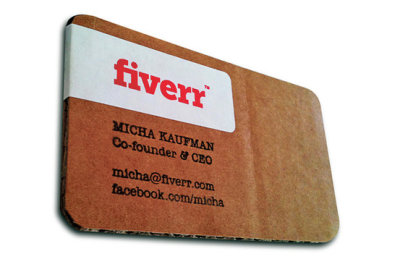 Micha Kaufman, co-founder of Fiverr.com, crafted his own cards by cutting a computer box into nearly 100 cardboard rectangles that he stamped with the company logo in red ink. Mr. Kaufman just gives them to people who might be important partners or boosters of his company. "You don't need a million cards," he says.

Fiverr, based outside of Tel Aviv, is an online marketplace where users offer or purchase services that range from $5 to $150.

As long as the logo isn't altered too much, Mr. Kaufman says he encourages his staff to conceive or order its own cards. Some employees make them by hand. Some contract users on the site to create cards. Others design and order them through Moo.com, a business-card company popular with the tech set.

Cards from Moo can be printed on thick paper stock from customized templates. The company was founded in 2006 and is on schedule to print 100 million business cards for customers this year, twice as many as last year, says Richard Moross, chief executive of the London-based company which prints its products in Providence, R.I.

Users can enable the service to pull photos from their Facebook and Flickr accounts. A single order of 50 glossy, personalized cards costs about $30.

Business cards that draw influences from social media and tech products are popular. Among Moo's best sellers is a template that features a small square headshot that runs in the foreground of a larger horizontal photo similar to a Facebook profile. Cards that bear on their fronts inspirational quotes—one of the most shared types of images on Pinterest—also sell well, Mr. Moross says. 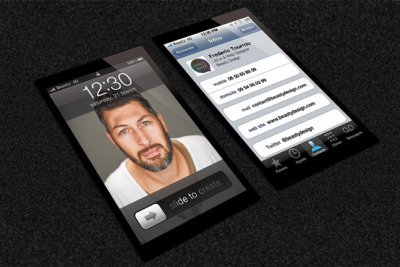 Not all companies are happy to inspire business-card designs. A few months ago, Frederic Tourrou, of Toulouse, France, made a card that resembled an iPhone's photo screen saver on one side and the phone's address book on the other. He posted a photo of the card online.

Mr. Tourrou, a graphic designer, has received thousands of requests from people wanting to buy similar cards. He also got an email from an Apple Inc. (AAPL) employee alerting him that likenesses of Apple's designs can't be marketed by others. Mr. Tourrou didn't sell any cards. "I really don't want to cause trouble with Apple," says the 34-year-old father of two. Apple didn't respond to requests for comment.

Sometimes, the business cards aren't even cards. Dennis B. Petersen, a product manager for Lego, introduced himself at the South by Southwest tech convention in Austin, Texas, earlier this year by handing out miniature Lego figurines stamped with his name and contact details. "People were approaching me on the street, saying, 'You're the guy with the Lego cards, can I have one?' " Mr. Petersen says.

Some cards develop followings of their own. Three years ago, information-safety expert Kevin Mitnick, 49, ordered cards made of lightweight metal featuring a removable set of flat lock-picking tools. He gives away the cards freely, which cost about $2 apiece, at speaking engagements.

But demand from strangers for his cards surged. Mr. Mitnick instituted a policy: Mail him $5 and a self-addressed, stamped envelope and he will mail you a card. To date, he has shipped 3,000.