In 1942, Winston Churchill and Franklin Roosevelt issued a statement that the western allies would work as quickly as possible to open a second front to relieve pressure on the Soviets. Though united in this goal, issues soon arose with the British who favored a thrust north from the Mediterranean,through Italy and into southern Germany. Against this, the Americans advocated a cross-Channel assault which would move through Western Europe along the shortest route to Germany. As American strength grew, they made it clear that this was the only approach they would support.

The Allied casualties figures for D-Day have generally been estimated at 10,000, including 2,500 dead. Broken down by nationality, the usual D-Day casualty figures are approximately 2,,700 British, 946 Canadians, and 6,603 Americans. However recent painstaking research by the US National D-Day Memorial Foundation has achieved a more accurate - and much higher - figure for the Allied personnel who were killed on D-Day. They have recorded the names of individual Allied personnel killed on 6 June 1944 in Operation Overlord, and so far they have verified 2,499 American D-Day fatalities and 1,914 from the other Allied nations, a total of 4,413 dead (much higher than the traditional figure of 2,500 dead). Further research may mean that these numbers will increase slightly in future.  This new research means that the casualty figures given for individual units in the next few paragraphs are no doubt inaccurate, and hopefully more accurate figures will one day be calculated.

Codenamed Operation Overlord, planning for the invasion began in 1943. In November of that year, planning passed to General Dwight D. Eisenhower who was promoted to Supreme Commander of the Allied Expeditionary Force (SHAEF) and given command of all Allied forces in Europe. Moving forward, Eisenhower adopted a plan begun by the Chief of Staff of the Supreme Allied Commander (COSSAC). The COSSAC plan called for landings by three divisions and two airborne brigades in Normandy. This area was chosen by COSSAC due to its proximity to England, which facilitated air support and transport, as well as its favorable geography. 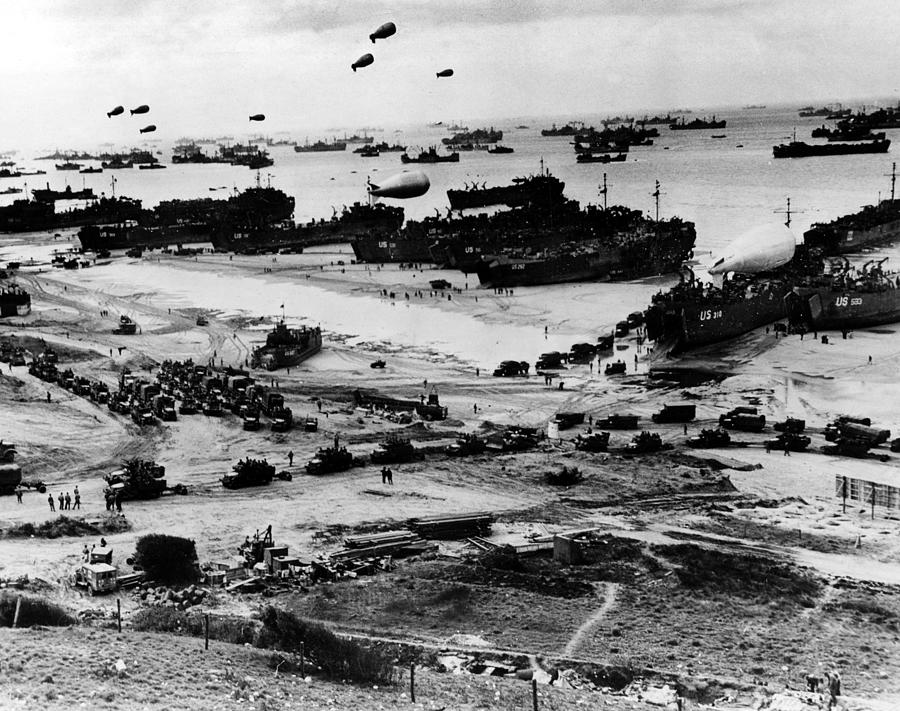 Adopting the COSSAC plan, Eisenhower appointed General Sir Bernard Montgomery to command the invasion's ground forces. Expanding the COSSAC plan, Montgomery called for landing five divisions, preceded by three airborne divisions. These changes were approved and planning and training moved forward. In the final plan, the American 4th Infantry Division was to land at Utah Beach in the west, while the 1st and 29th Infantry Divisions landed to the east on Omaha Beach. These were separated by a headland known as Pointe du Hoc. Topped by German guns, capture of this position was tasked to the 2nd Ranger Battalion.

Separate and to the east of Omaha were Gold, Juno, and Sword Beaches which were assigned to the British 50th, Canadian 3rd, and British 3rd Infantry Divisions respectively. These units were supported by armored formations as well as commandoes. Inland, the British 6th Airborne Division was to drop to the east of the landing beaches to secure the flank and destroy several bridges to prevent the Germans from bringing up reinforcements. The US 82nd and 101st Airborne Divisions were to drop to the west with the goal of opening routes from the beaches and destroying artillery that could fire on the landings (Map). Confronting the Allies was the Atlantic Wall which consisted of a series of heavy fortifications. In late 1943, the German commander in France, Field Marshal Gerd von Rundstedt, was reinforced and given noted commander Field Marshal Erwin Rommel. After touring the defenses, Rommel found them wanting and ordered that they be greatly expanded. Having assessed the situation, the Germans believed that the invasion would come at the Pas de Calais, the closest point between Britain and France. This belief was encouraged by an elaborate Allied deception scheme, Operation Fortitude, which suggested that Calais was the target.

As the Allies required a full moon and a spring tide, possible dates for the invasion were limited. Eisenhower first planned to move forward on June 5, but was forced to delay due to poor weather and high seas. Faced with the possibility of recalling the invasion force to port, he received a favorable weather report for June 6 from Group Captain James M. Stagg. After some debate, orders were issued to launch the invasion on June 6. Due to the poor conditions, the Germans believed that no invasion would occur in early June. As a result, Rommel returned to Germany and many officers left their units to attend war games.

The Night of Nights:

Departing from airbases around southern Britain, the Allied airborne forces began arriving over Normandy. Landing, the British 6th Airborne successfully secured the Orne River crossings and accomplished it objectives. The 13,000 men of the US 82nd and 101st Airbornes were less fortunate as their drops were scattered which dispersed units and placed many far from their targets. Operating in small groups, they were able to achieve many of their objectives as the divisions pulled themselves back together. Though this dispersal weakened their effectiveness, it caused great confusion among the German defenders. 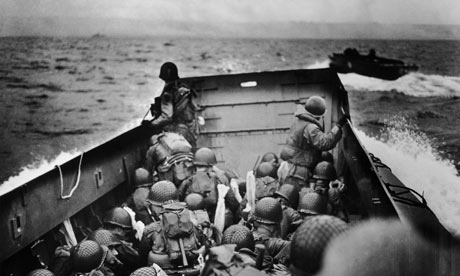 The assault on the beaches began shortly after midnight with Allied bombers pounding German positions across Normandy. This was followed by a heavy naval bombardment. In the early morning hours, waves of troops began hitting the beaches. To the east, the British and Canadians came ashore on Gold, Juno, and Sword Beaches. After overcoming initial resistance, they were able to move inland, though only the Canadians were able to reach their D-Day objectives. Though Montgomery had ambitiously hoped to take the city of Caen on D-Day, it would not fall to British forces for several weeks.

On the American beaches to the west, the situation was very different. At Omaha Beach, US troops quickly became pinned down by heavy fire from the veteran German 352nd Infantry Division as the pre-invasion bombing had fallen inland and failed to destroy the German fortifications. After suffering 2,400 casualties, the most of any beach on D-Day, small groups of US soldiers were able to break through the defenses opening the way for successive waves. On Utah Beach, US troops suffered only 197 casualties, the lightest of any beach, when they were accidentally landed in the wrong spot. Quickly moving inland, they linked up with elements of the 101st Airborne and began moving towards their objectives.

By nightfall on June 6, Allied forces had established themselves in Normandy though their position remained precarious. Casualties on D-Day numbered around 10,400 while the Germans incurred approximately 4,000-9,000. Over the next several days, Allied troops continued to press inland, while the Germans moved to contain the beachhead. These efforts were frustrated by Berlin's reluctance to release reserve panzer divisions in France for fear that Allies would still attack at Pas de Calais.

Continuing on, Allied forces pressed north to take the port of Cherbourg and south towards the city of Caen. As American troops fought their way north, they were hampered by the bocage (hedgerows) that crisscrossed the landscape. Ideal for defensive warfare, the bocage greatly slowed the American advance. Around Caen, British forces were engaged in a battle of attrition with the Germans. The situation did not change radically until the US First Army broke through the German lines at St. Lo on July 25 as part of Operation Cobra.