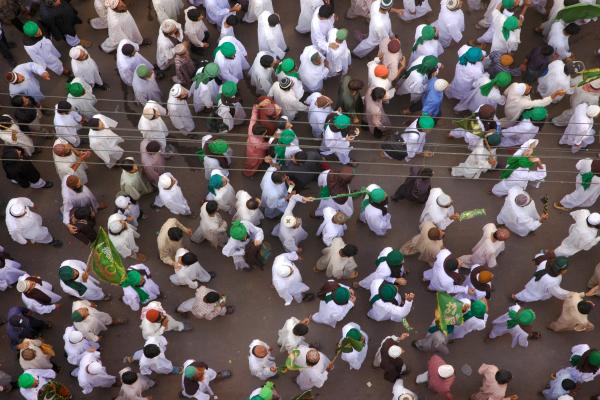 Pictured above is a group of Muslims in Karachi, Pakistan, in procession for the Prophet Muhammad's birthday. ©iStockphoto.com/ameer_great

Milad-un-Nabi observances differ among people following different schools of Islamic Jurisprudence (Fiqh). Some scholars forbid celebrations and even challenge the holiday’s legality in light of Sharia (Islamic law). Many Muslims do not believe in celebrating birthdays or anniversaries as there is no evidence from Prophet Mohammad’s life of such observances. On the other hand, many Islamic scholars believe that this day should be celebrated festively. There is a considerable number of Muslims that observe this day with utmost religious fervor.

The day starts off with an official 31-gun salute at the federal capital and a 21-gun salute in provincial headquarters. The national flag is hoisted on all major public buildings, governmental, non-governmental facilities, mosques and even households are tastefully decorated and colorfully illuminated at night.

Seerat conferences are organized at both federal and provincial levels where religious scholars and intellectuals come and shed light on the Prophet Muhammed’s life, sayings, teachings and philosophies. Naat (poetry written in praise of the Prophet) and Koran recitation competitions are also held where prizes are distributed among people who perform outstandingly in the above stated disciplines.

Many people also donate to charity. Food and sweets are distributed among the poor and the needy. Moreover, contributions are made to support orphanages, asylums for the physically and mentally challenged, and widows.

Special prayers are offered at mosques. Religious leaders and scholars preach the Prophet Muhammed’s teachings. Stories and incidents from his life of morals, such as forgiveness, kindheartedness, bravery, wisdom, honesty, and peace lovingness, are quoted.

Milad-un-Nabi congregations, rallies and processions also take place in major cities across Pakistan. These processions usually start from a central location (central mosques or locations of public prominence), pass through designated routes, and end at the starting point.

Eid Milad-un-Nabi is a public holiday in Pakistan. All government and semi government offices, and most private offices, businesses, shopping malls, post offices and educational institutions are closed on this day.

The first public celebrations of Milad-un-Nabi occurred in Egypt towards the end of the 11th century. It was primarily a festival of the Shia ruling class. The celebrations featured Koran recitations, animal sacrifices, public sermons and feasts.

The first public observance of Milad-un-Nabi by Sunnis took place in 12th century in Syria under the rule of Noor-un-Din Zangi. In 1910 it was given the official status as a national festival throughout the Ottoman Empire. Milad-un-Nabi is now an official holiday in many Muslim countries throughout the world.

Green colored pennants are often seen during Milad-un-Nabi processions, on shrines and mosques. Green is a color associated with the Prophet as being one of his favored colors. It is said that the Prophet chose a green colored flag to represent the Islamic republic during his life. Candles and oil lamps (Chiragan) are lit on the eve of 12 Rabi-ul-Awwal to welcome the Prophet’s arrival and to celebrate his birth.