With global warming becoming a serious threat to mankind, Eco-friendly methods are being adopted to minimize its effects. People have resorted to minimize the consumption of electricity and maximize the growth of plants and trees around themselves. With such an approach, even religious institutions are being designed keeping the hazards of global warming in mind. An example of such an institution is a mosque which is about to be set-up in Dubai, which is aimed at being Eco-friendly. The project has been set to be completed in 18 months. 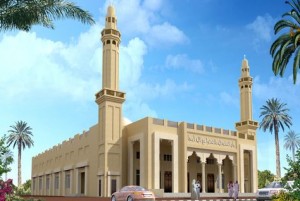 Awqaf and Minor Affairs Foundation (AMAF) has recently announced the construction of an Eco-friendly mosque in Dubai, which will be the first one of its kind located there. Along with being Eco-friendly, it will also be the largest one in Emirates. The contract to build the mosque has been given away to Al Arif Contracting and will cost roundabout AED25 million.

The mosque has been aimed to be completed by the closing of 2013 and is decided to be located behind the Al Rowad village near the Deira Clock Tower. It will cover an area of about 4180 square meters with the capacity of 3500 men praying inside it.

For the purpose of making it Eco-friendly, a number of steps have been taken. Photovoltaic panels are to be used to provide electricity for heating water for ablutions and other work. A highly efficient air-conditioning and a computerized system will be installed mainly to check the efficiency of the electrical equipment. The main front of the building will have a special coating on it to keep it cool in summers. The mosque will be placed in such a direction so as to get the maximum light, thus reducing the consumption of electricity. In addition, there will also be techniques to save water used in ablutions by reusing it for the purpose of flushing toilets and for irrigating the landscape filled with greenery. In the construction of the mosque, asbestos and polystyrene shall be avoided to add to the Eco-friendly environment. It has also been planned to use thermal insulation, suction fans with energy recovery units, programmed and automatic thermostat, and natural light and heat reflective colors specifically for roofs and interfaces.

In order to develop the project as an Eco-friendly one, Awqaf and Minor Affairs Foundation (AMAF) along with a British company named Greenfield Consulting took eight months to design and finalize it. The construction of the mosque was about to be funded by an Emirati, who wished it to be built in Ottoman style, but because he went into coma, the responsibility of the construction was handed over to the foundation.

Although most of the things are in accordance with the patron’s wishes, the Eco-friendly theme has been brought in by the foundation, making it eligible for certification under the Leadership in Energy and Environment design scheme. The foundation also aims at reducing the water co

Muhammad Bilal replied to shabbir ghuman's discussion An invitation to Complete Quran Sharif in Ramzan 2021 to all ning members.
21 minutes ago