The fastest 100-meter hurdles wearing swim fins by a female is 22.35 seconds. It was achieved by Maren Zönker of Germany in Cologne, Germany, on Sept. 13, 2008. 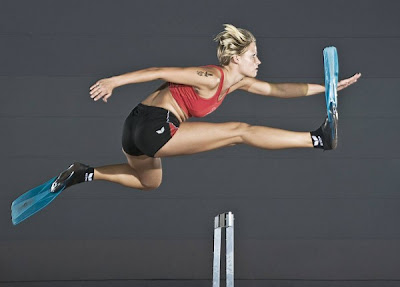 On May 4, 1951, Sir Hugh Beaver, then the managing director of the Guinness Brewery, went on a shooting party in North Slob in County Wexford, Ireland. He became involved in an argument over which was the fastest game bird in Europe, then later realized it was impossible to confirm in reference books. He then thought that a book supplying answers to such questions could be popular.

The first 197-page edition of the “Guinness Book of Records” was bound on Aug. 27, 1955, and went on to the top of the British best-seller list by Christmas. Over 400 million copies have sold since the first edition. The most recent one to hit the shelves is the “Guinness World Records 2010.” Here is list of 50 interesting Guinness records that will surely amaze you.

2. Most people dressed as Smurfs

The most people dressed as Smurfs was 1,253 and was achieved by the Muckno Mania Festival in Castleblayney, Co Monaghan, Ireland, on July 18, 2008.

The world’s largest pocket knife measures 3.9 meters (12 feet, 8 inches) when open, and weighs a total of 122 kilograms (268.9 pounds). It was designed by Telmo Cadavez of Bragança, Portugal, and handmade by Virgilìo, Raúl and Manuel Pires of Portugal, Jan. 9, 2003. 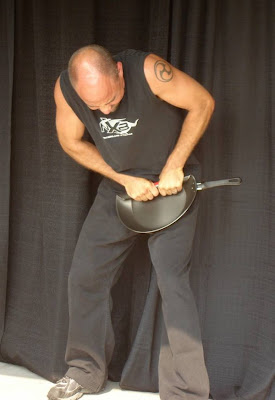 The most beer steins carried over 40 meters (131 feet, 3 inches) by a female is 19. This was achieved by Anita Schwarz in Mesenich, Germany, on Nov. 9, 2008, in celebration of Guinness World Records Day.

8. Longest distance on a unicycle in 24 hours

9. Largest collection of ‘Do Not Disturb’ hotel signs

Jean-François Vernetti of Switzerland has collected 8,888 different ‘Do Not Disturb’ hotel signs from 189 countries across the world since 1985.

Melvin Booth (left) of Troy, Mich., had a combined fingernail length is 9.05 meters (29 feet, 8.3 inches). Lee Redmond(right), who had not cut her nails since 1979 and had them carefully manicured to reach a total length of 8.65 meters (28 feet, 4.5 inches), lost them when they broke off in a car accident in February.

Woman with longest nails loses them in a crash

Lee Redmond, who held a Guinness World Record for her more than 28-foot-long fingernails before they broke off in a car crash, says it was the most dramatic event of her life. But the 68-year-old also admits that things are much easier without them.

11. Most T-shirts worn at once

The record for the most T-shirts worn at once is 227 and was achieved by Jef Van Dijck in an attempt organized by Unizo in Brecht, Belgium, on April 24, 2008.

Garry Turner of Great Britain is able to stretch the skin of his stomach to a length of 15.8 centimeters (6.25 inches) due to a rare condition called Ehlers-Danlos Syndrome, a disorder of the connective tissues affecting the skin, ligaments and internal organs. The collagen that strengthens the skin and determines its elasticity becomes defective, resulting in, among other things, a loosening of the skin and hypermobility of the joints. In more serious cases, it can cause the fatal collapse or rupturing of blood vessels.

13. Most Mentos in soda fountains

The most Mentos and soda fountains achieved in the same place is 1,911, and was conducted by the people of Latvia and students of TURIBA in Riga, Latvia, on June 19, 2008.

The largest collection of clocks belongs to Jack Schoff of the U.S., who has amassed 1,094 different clocks as of June 17, 2008.

The longest time spent in direct, full-body contact with ice is 1 hour 42 minutes and 22 seconds by Wim Hof of the Netherlands on Jan. 23, 2009.

The oldest table tennis player is Dorothy de Low. De Low was 97 years old when she represented Australia at the XIV World Veterans Table Tennis Championships at Rio de Janeiro, Brazil, on May 25, 2008.

22. Largest crew of a canoe

The largest gathering of Santa Clauses was achieved by 13,000 participants in the Guildhall Square in Derry City, Northern Ireland, U.K., on Dec. 9, 2007.

Built by Howe and Howe Technologies and measuring less than 1 meter (3 feet, 3 inches) wide, the PAV1 Badger is the smallest all-terrain armored vehicle. It is powerful enough to break down doors but small enough to fit in a lift. It was commissioned by Civil Protection Services of California.

The largest known land gastropod is the African giant snail (Achatina achatina). The largest recorded specimen of this species measured 39.3 centmeters (15.5 inches) from snout to tail when fully extended. Its shell length was 27.3 centimeters (10.75 inches) and it weighed exactly 900 grams (2 pounds).

The fastest speed on an unaltered lawnmower is 98 km/h (61 mph) by Tommy Passemante of the U.S. at Miller Motorsports Park in Tooele, Utah, on Nov. 18, 2008, for the MTV show “Nitro Circus.” 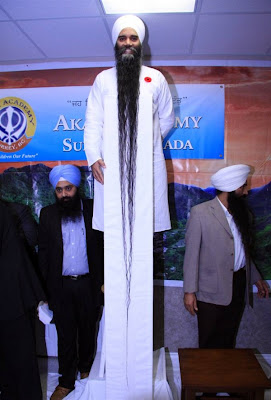 32. Most eggs crushed with head in one minute

Ashrita Furman crushed 80 eggs with his head in one minute at the Panorama Café, Jamaica, New York City, on Dec. 10, 2008.

The heaviest weight pulled with the eye sockets is 411.65 kilograms (907 pounds) and was achieved by The Space Cowboy, aka Chayne Hultgren of Australia, on the set of “Lo Show Dei Record” in Milan, Italy, on April 25, 2009.

Victor “Larry” Ramos Gomez, pictured, and Gabriel “Danny” Gomez (both of Mexico) are two of a family of 19 that spans five generations all suffering from the rare condition called Congenital Generalized Hypertrichosis, characterized by excessive facial and torso hair. The women are covered with a light to medium coat of hair while the men of the family have thick hair on approximately 98 percent of their body, apart from their hands and feet.

39. Greatest altitude for a balloon skywalk

As of July 7, 2006, the record for the smallest living horse was held by Thumbelina, a miniature sorrel brown mare who measures 44.5 centimeters (17.5 inches) to the withers and is owned by Kay and Paul Goessling, who live on the Goose Creek Farm in St. Louis, Mo.

He Pingping from Mongolia, the world’s smallest man (74.61 centimeters; 29.3 inches) stands between the legs of Svetlana Pankratova from Russia, the woman with the world’s longest legs. Pankratova’s legs are officially 51.9 inches long — nearly 4 feet 4 inches.

For world’s leggiest woman, romance is a tall order

Svetlana Pankratova is enjoying her celebrity as the woman certified by Guinness to have the world’s longest legs (4-foot-4). But it has its challenges: “Some [men] don’t like standing next to a woman that tall,” she said. And finding dress pants? “Impossible.”

Michael Jackson impersonator Hector Jackson performs with thousands of people at the Monument of the Revolution in Mexico City on Aug. 29, 2009. The Guinness World record of most people dancing Michael Jackson’s “Thriller” is 13,597.

Kim Goodman of the U.S. can pop her eyeballs to a protrusion of 11 millimeters (0.43 inch) beyond her eye sockets. Her eyes were measured on the set of the television show “Guinness World Records: Primetime,” in Los Angeles on June 13, 1998.

Participants toss pies for the World’s Largest Pie Fight in front of ABC Studios in New York, on Sept. 17, 2009, during “Live with Regis & Kelly.”

The world’s tallest man, Sultan Kosen of Turkey, is measured by Guinness Book of World Records’ officials on Sept. 21, 2009. Kosen towers over the rest of the world at an astounding 8 feet 1 inch

Turk Sultan Kosen, 27, says he is ”proud and happy” at being named the new Guinness record holder for tallest man, and human, in the world. “Up until now, I’ve really had a difficult life,” said the 8-foot-1-inch man, whose height was caused by a pituitary condition. “From now, I’m really going to have it a lot easier.”

Gibson, a Great Dane, was the world’s tallest dog. He measured 107.18 centimeters from floor to shoulder and stood at 2.19 meters. In this photo, Gibson is playing with with his friend, Zoie a 19.05 centimeter Chihuahua. The tall California dog, who was battling bone cancer, passed away on Aug. 12, 2009.

Gibson, the California dog dubbed the tallest in the world by the Guinness Book of World Records, has died after a battle with bone cancer.

The deepest cycling underwater is 66.5 meters (214 feet, 10 inches) and was achieved by Vittorio Innocent in Santa Margherita Ligure, Liguria, Italy, on July 21, 2008.

+ M.Tariq Malik added a discussion to the group ZOO505 Cell and Molecular Biology

+ M.Tariq Malik added a discussion to the group ECO401 Economics