The first railway line was laid in the in the areas that now comprise Pakistan in the year 1858 in Karachi. Following is the story of this historical event as well as the construction of first railway section of Pakistan which was opened between Karachi City and Kotri in 1861.

Following photo is kind of jumping the gun in our story but it is the earliest photo of railways that I could research for Karachi-Kotri section. The photo is circa 1900 and shows the 0530 a.m. passenger train reaching Frere Road Station (now called Karachi Cantt) from Kotri.

The origin of Railways in Pakistan is quite unusual. The railway here was not built for commercial passenger service but more for the reason of cutting transport time for cargo bound for East. The first line from Karachi to Kotri was constructed primarily to reduce the journey time on the final stage of long haul from Britain to Delhi and Calcutta. Many of the later lines were built for Military purposes.

The Railway planning in the areas that comprise Pakistan got an official status when Lord Dalhousie, Governer General of India, gave his approval for laying a 108 miles (173 km) long railway line between Karachi and Kotri in December, 1853 .

The Ground Breaking of the First Railway Project:

Sir Bartle Frere, who was the then Commissioner of Scinde (Sindh) did the ground breaking of the project on April 29, 1858. The ceremony included him pushing a wheel-barrow full of construction material at the site of a railway embankment in Karachi.

I can say for sure that first Railway Track in Pakistan was thus laid somewhere between April, 1858 and December, 1859. This is a 16 month long time period but I am unable to research the exact date or a time window any shorter than this.

In 1859, two small stretches of Railway Line were opened in Karachi. One of this track section still exists while the other one has been uprooted.

The First section, which exists to date, ran from the then Karachi port of Kimari to Railway Workshops which were located near the present day ‘kala pul’ just north of Karachi Cantt Station.

See the map of Karachi from 1893. Find Kimari here which was an island in 1893. From Kimari follow the solid black line towards the ‘green rectangle’ (now Karachi Cantt Station) and onwards to violet rectangle (which was once the Railway Workshop). The precise location of this Railway Workshop, which is not present today is unknown to me. There are two routes shown between Kimari and Karachi cantt. I will request you to consider the lower one, the one which bypasses the blue rectangle. This was the first ever piece of railway track built in Karachi (and Pakistan) I will also request you to click on the following map to open a much larger and better readable map image. 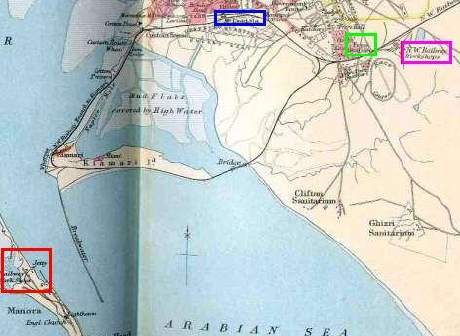 The Second Track which became operational in Karachi started from the Railways Workshop near present-day ‘kala pul’ and went east-wards to Gizri bandar (harbor) located in Gizri Creek. This track and the Railway Workshop is not present anymore but my strong guessis the track ran parallel to present-day Korangi Road until it reached Gizri Creek (near Present Day Marina Club in Defense Housing Society). Any confirmation here from our learned readers will be highly appreciated.

This following map shows the location of these very first stretches of Railway Lines which were built in Pakistan. Note the location of present day Kimari, Karachi City Station, Karachi Cantt Station and Ghizree (Gizri) Creek marked on the map. Also note how the English spellings of these places have evolved over time. 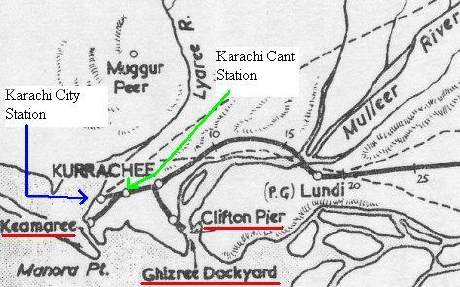 Following is the satellite image of present day Karachi with superimposed colored lines to show the two sections which became operational in 1859. While the ‘green’ track is still operational, the history that I have researched so far is silent on when was the ‘yellow’ track uprooted and what was its exact route. 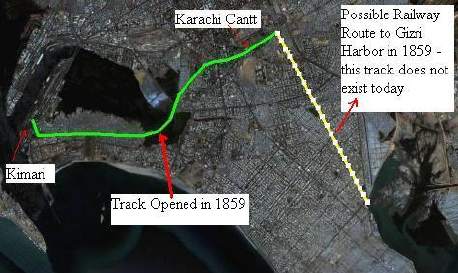 Among whole of Pakistan, people of Karachi were the first to see a steam locomotive in action and many could not believe what were they seeing.

As an inaugural run of Railways in Karachi, John Brunton the Chief Engineer of Karachi-Kotri Railway Project, drove in a steam locomotive with Sir Bartle Frere, the Commissioner of Sindh to Kiamari in a railway train. Once again I don’t have the exact date of this travel but it was most likely between 1859 and 1861.

John Brunton wrote following anecdote on this occasion and it sounds so strange today:

The natives of Scinde had never seen a locomotive engine, they had heard of them as dragging great loads on the lines by some hidden power they could not understand, therefore they feared them, supposing that they moved by some diabolical agency, they called them shaitan. When I got out my locomotive for trial the Karachi natives were astounded. I drove the engine myself of course at a slow speed – the natives thronging all round, I was fearful of some accident. At last I thought I should frighten them away, so I blew the engine steam whistle loudly. Instantly they all rushed back from the “Demon” falling over one another much to our amusement.

We promise a detailed post on Indus Flotilla Company only (which I’ve already formatted and we’ll share at ATP soon). Today we’ll just give a brief introduction about it.

Before the advent of Railways, cargo from Karachi harbor was shipped to rest of India via steamers of ‘Indus Flotilla Company’. The steamers took Cargo upto Multan via river Indus and Chenab. This river journey between Karachi and Multan used to take up to 40 days.

Look at the map below. It is from 1865 when Karachi-Kotri and Multan-Lahore-Amritsar Railway line was already built. The reason I want to share this map here is to show how the cargo was moved from Karachi to Delhi via rail and river.

The guage (width) of the railway line was selected as 5′ 6″. It however, narrowly escaped conversion to meter gauge due to high cost of the project.

The reason why the decision was finally made in favor of wider gauge for Karachi-Kotri section was the fact that strong sea breeze blows in this area during monsoon. As there is no natural hindrance, the winds blow with such speed that they pose immense resistance to smaller vehicles. One needs to travel on this route during monsoon to actually feel how strong the winds can be. It has been recorded that strong sea breeze blows on this section on 330 days out of 365 days of a year.

Challenges Faced During the Construction:

As the construction on Karachi – Kotri section began, the engineers had to face extreme problems which do not exist today. There were no motor trucks, cars or trolleys in those days. Boats and bullock carts had to be used for the transport of rails.

Whenever the chief engineer wanted to go on inspections, a whole congregation had to go with him including men, tents and camels. The average distance they could cover was no more than 15 km a day. Little confidence was reposed in the local people and the British officers moved about armed. The chief engineer John Bruntonalways carried a brace of loaded revolvers in his belt and a sword by his side.

The contractor, by the name of Brav, got a lot of trouble. He ran away after 12 months leaving 12000 workmen unpaid.