On the first Sunday of September, the small town of Zundert in the south of Netherlands came alive as it hosted the largest flower parade in the world. Corso Zundert has become known worldwide as a grandiose event that takes over the streets with gigantic floats all made with flowers. Thousands of spectators, both young and old, came out to witness the twenty amazing dahlia creations.

This year, we saw everything from MC Escher and Monet inspired floats to one featuring, wait a minute, flashers! The first place winner was called Crazy Gold (or Gekkengoud) and it was by Laer-Akkermolen. Float designers Steven van Erck and Stefan van Steen created this gargantuan wonder about the Aztec ruler that had himself gilded. The Spanish believed that whoever looked at him would slowly become mad. Oro Loco they called it or "maddening gold". You can watch the huge flower sculpture move through the streets,

Second place went to Klein-Zundertse Heikant for Ent, the tree that glows green , and third place went to Schijf for Black Gold, which featured a giant snorting pig peeking out from under the ground These brand new photos were just released to us by the people who run Corso Zundert. (We first wrote about their parade .) Though all the photos are impressive, you must watch the videos to really see these flower floats in action. (The winning Aztec-inspired float had 53 different movements!) Crazy Gold by Laer-Akkermolen (1st Place Winner)
Designers: Steven van Erck and Stefan van Steen
An Aztec ruler was once so crazy about gold, that he had himself gilded alive. When the Spanish discovered his likeness, they were convinced that everyone who looked at it would gradually go mad. They named it Oro Loco.
Crazy gold … 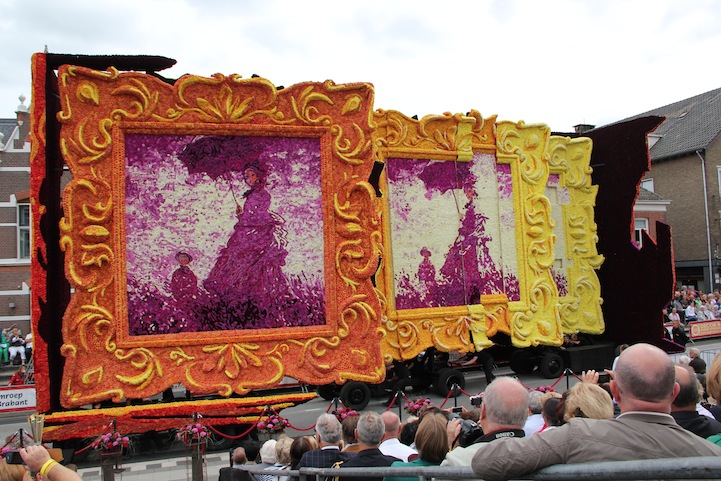 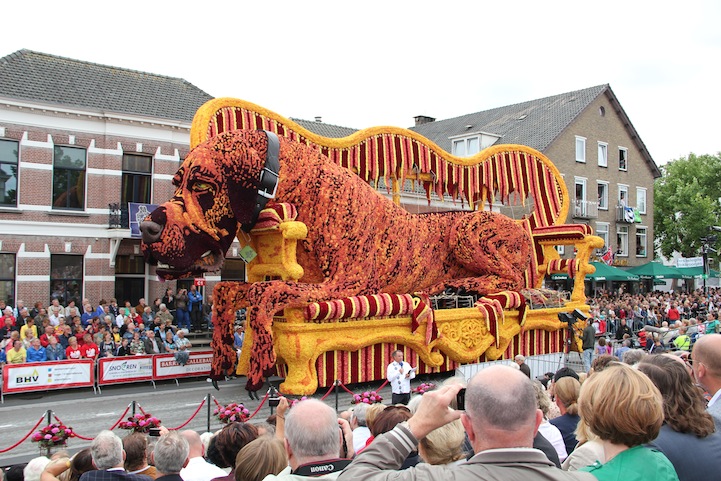 It Wasn’t Me by De Berk
Designers: Erik van Elsacker, Aart-Jan Borrias and René Jochems
When we got home he failed to greet us. He lay there quietly on our highly expensive antique settee as if to say: “It wasn’t me”. Flashers! by Wernhout
Designers: Erwin Leenaerts, Mathieu Rombouts and Ronald Martens
May be this is familiar to you. You’re walking along the street and someone’s coming towards you. He is looking rather scruffy and he’s holding his coat in a rather strange way. He gives you a side-long glance and it would seem that he is waiting for the opportunity … 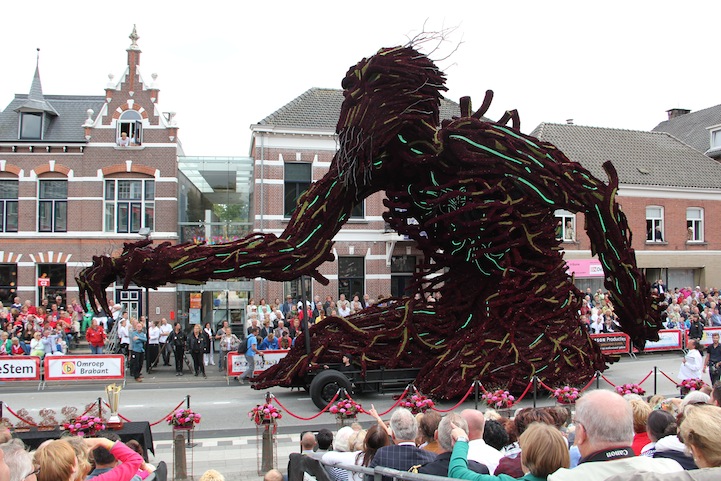 Last Minute by De Lent
Designers: Harry van den Broek and Eddy van den Broek
In today’s last-minute society we are constantly in a hurry. In his hectic existence, man is clock and alarm clock simultaneously; he winds himself up and propels himself along. Our lives have become last-minute. There is never enough time for everything; there is never a second to spare. We are constantly living in a race against time. But it is not time itself which has created our last-minute society. Through the centuries time has not actually decreased or increased in volume. More and more, it is people who live at odds with time.
Stress is now and tomorrow, the dreadful last minute is suddenly upon us. Adrenaline rushes through the body, pumping people full of stress hormones. Everything is arranged and organised at the last minute: travelling, getting up, eating, working, doing the shopping and ordering online. “Long live our last-minute society!”

Venus of Milos by Molenstraat
Designers: Robin Schijfs, Jesse Verheijen and Ton van Beek
‘The sculpture is already in the stone, you only have to release it’.
(Michelangelo Buonarroti) 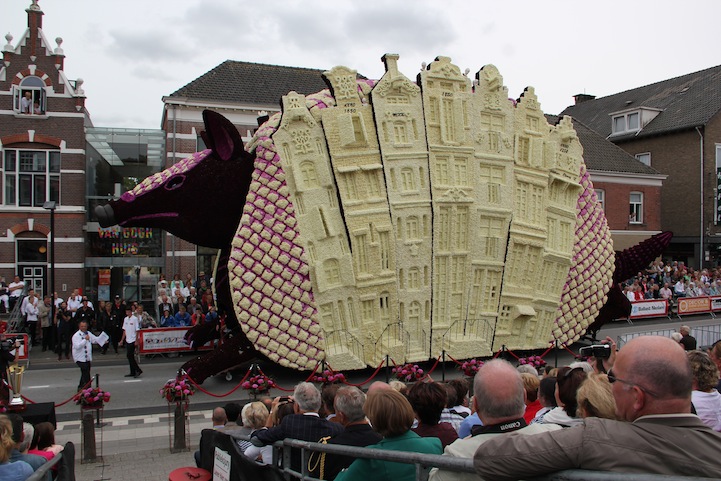 Gordel by Raamberg
Designers: Roy Verdaesdonck and Niek van den Broek
It is impossible to imagine Amsterdam without its distinct central canal district, in Dutch named the grachtenGORDEL, the rings of canals. On this float, their magnificent town houses are carried by an armadillo which in part shares the same name in Dutch (GORDELdier, ringed animal) as the district; they parade their way through the streets of Zundert. Experience both the day and night life of our capital city. 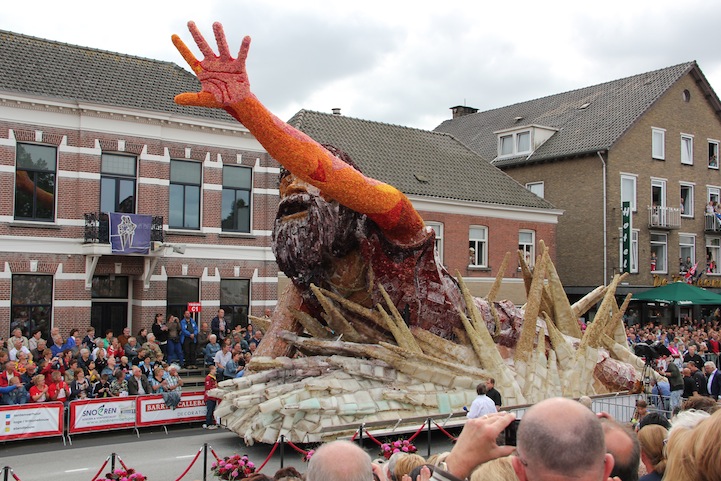 Global Warming by ’t Stuk
Designers: Marjolein Koeken, Johan Raats, Jack Schetters and Joël Sprenkels
5,000 years ago he desperately tries to escape, but he has grown too weak. He will be imprisoned in this advancing glacier for millennia. 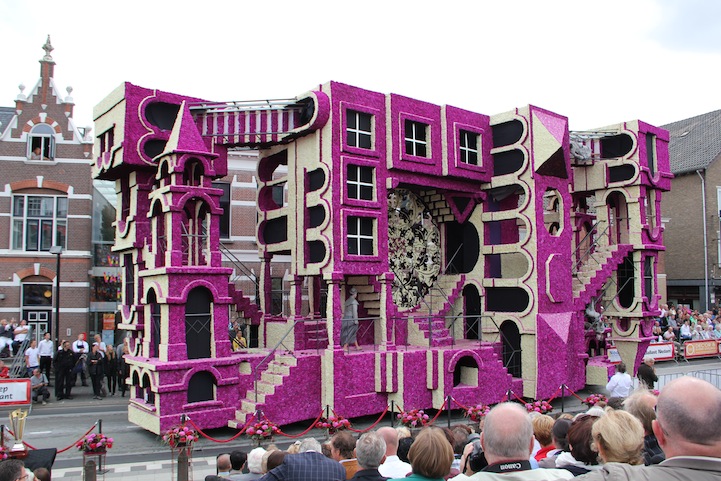 Tricked by Veldstraat
Designers: Jos van Aert and Erwin Braspenning
This is left and that is right.
This is under and that is above.
I believe my eyes.
My entire life long.
That’s the way it goes, isn’t it?
Anyway ...
That’s what I want to believe.

Now I am taken off balance.
What is left and right here?
Is this under or rather above?
I don’t believe my eyes.
It’s all over my head.
Now I don’t know any more.
I’ve been tricked. Black Gold by Schijf (3rd Place Winner)
Designers: Huub van Caam and Maikel van de Korput
Black Gold refers to a delicacy, the black truffle.
For hunting for this gold
pigs are traditionally used,
due to their excellent tracking abilities.