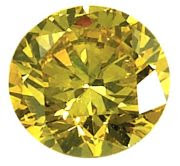 Yellow diamonds can also cost lot of money just like other fancy colored diamonds. Of course, this mostly refers to vivid yellow colored diamonds which are very rare and therefore very expensive.

So how much do vivid yellow diamonds cost? The last big vivid yellow diamond was sold couple of days ago for staggering $6.6M at Christie's Sale of Magnificent Jewels. This is just another proof that there is always a high demand for fancy colored diamonds.

This magnificent pear-shaped yellow diamond weigh 32,77 carats, VS2, and achieved a price of $201,000 per carat. It was bought by an anonymous buyer.

The color of vivid yellow diamonds is incredible, it's literally blazing with yellow hues. Finding such diamond in nature is extremely difficult because this is an extremely rare geological phenomenon.

The largest yellow diamond ever found was The Kimberly Octahedron that was discovered in the Dutoitspan Mine in South Africa in 1964. It is the 14th largest gem-quality rough diamond ever discovered by weighing 616 carats.

It is really no wonder that diamond got its name from the Greek word „adamas“ meaning indestructible. Diamond is the hardest substance that can be found in nature, its hardness is for instance 140 times the hardness of sapphire or ruby. In fact, diamond is the hardest known natural material on the Mohs scale of mineral hardness where it has the ultimate value of 10.

Diamond's remarkable hardness is one of the main reasons for its supreme physical and chemical properties though this does not mean that diamond is completely indestructible as it still needs to be preserved from accidents during its installation into certain jewelry setting.

The hardest diamonds have been found in New South Wales, Australia. These diamonds are very small and are mostly used to polish other diamonds.

Today's science has made it possible to improve hardness of the diamonds in the lab by several different high pressure and high temperature methods.

The hardness of the diamond is not the same as diamond's toughness because toughness strictly refers to material's ability to resist breakage from forceful impact. 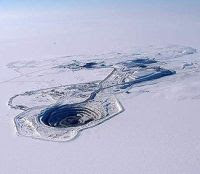 Canadian diamonds with a trademark polar bear image are conquering the world. Why? Over the last decade or so Canadian diamonds have become a symbol for quality and they also don't have to fear from being tagged as blood diamonds like this is the case with some diamonds coming from Africa.

Canada, together with Russia and Botswana, belongs to top three diamond producers in the world. Canada's huge production of diamonds is set to continue for at least next two decades because Canada's major diamond mines such as Ekati, Diavik, Jericho and Snap Lake still have plenty diamonds left in them.

Even if these famous mines run out of diamonds in years to come this should not have significant impact on future diamond production in Canada because Canadian North should soon become a home for several new diamond mines.

Canada also plans to use its wealth of diamonds for the purpose of tourism and has already announced plans to build a "diamond promotion centre" where visitors can see how the diamonds are made.

One thing is sure, diamonds are likely to play major role in Canada's economy for years to come. 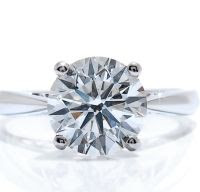 The US economy is certainly not at its very best but this didn’t cause the stagnation of US diamond market. On the contrary, even despite relatively high prices, there is a constant demand for round, 0.75-carat to 2.00-carat, F-H diamonds.

Fancy colored diamonds are also becoming increasingly popular, mostly because it is very difficult to find enough high end fancies for the richest clientele as they are always in short supply.

Christmas is not that far away and this is traditionally a peak time for diamond sales in United States. It is expected that U.S. retail sales for the Christmas season 2011 could increase by 3 percent compared to 2010.

On the global level there have been several reports about very weak trade of polished diamonds from Belgium, Israel and India because of the extremely cautious economic environment marked by price uncertainties.

China is expecting to see significant sale rise in October 2011 because National Day Golden Week holiday begins on October 1. It is also expected that by end of this year diamonds will experience decrease in prices and this is the main reason why Chinese retail buyers weren't going for large inventory purchases.

The last quarter of 2011 will decide whether the year 2011 will receive good final grade for global diamond industry. Many experts expect it to be better than the previous year but with the global economic uncertainties there is still plenty of uncertainty in the air.


The greatest diamonds in the world 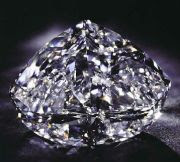 The greatness of certain diamond is primarily measured by its size and fame. Some diamonds, especially big diamonds, are more famous than other smaller diamonds. If I would have to draw up a list of the greatest diamonds in the world this would certainly include Star of The Africa, Koh-I-Noor, Orloff, Great Mogul, The Centenary, The Blue Hope and the Dresden Green.

Star of the Africa diamond is sometimes also referred to as Cullinan 1. This diamond still holds the record as the largest rough gem-quality diamond ever found, at 3,106.75 carats (621.35 g). There are several different anecdotes connected with this diamond, among which is also the one of famous diamond cutter Asscher who had a doctor and nurse standing by and when he finally cut the diamond and it broke perfectly in two, he fainted dead away. This diamond was discovered in the mines of South Africa.

Koh-I-Noor is truly a beautiful diamond, after all its name translated from Persian means "Mountain of Light". This large diamond comes from India and was discovered in the early ancient years. The anecdotes connected to this diamond include the theory that Koh-I-Noor diamond was originally part of the Great Mogul and also that it also carries a curse and only when in the possession of a woman will the curse not work.

Orloff (Orlov) diamond has also its origin in India though this large diamond today resides in Russia. At one time in history this diamond was given to the famous Russian Queen Catherine II by her lover Grigori Orloff and that's how this diamond got its name. The Orloff diamond is special because it retains its original Indian rose-style cut. It weighs around 190 carats.

The Great Mogul diamond as the name suggest is indeed a great diamond. This large diamond also has its origin in India. In its original state this diamond weighed astonishing 787 carats and was given as a gift to Shah Jehan, builder of the famous Taj Mahal.

The Centenary diamond still doesn't have very rich history because it has been discovered in 1986 in South Africa's Premier Mine. This diamond is internally and externally flawless and weighs 273.85 carats and has a remarkable 247 facets. The current owner of this great diamond is unknown as in 2008 this gem has been sold to an unknown buyer.

The Blue Hope. Every list of the greatest and the most famous diamonds includes The Blue Hope diamond. This is probably because this diamond has the reputation of being the most cursed among world's famous diamonds. This diamond is not that large as some of its famous brothers by weighing 45.52 carats but its fame and legends connected to it certainly make it enormously big. After all only Mona Lisa gets more visits than this mystery diamond. Its current residence is Smithsonian, Washington.

Dresden Green is certainly the good way to finish the story about world's greatest diamonds. Though this diamond has a weight of "only" 41 carats it is nonetheless one of the most important diamond discoveries in the world. Its special character comes from its unique green color and this diamond is being used to compare natural versus lab-produced green diamonds.