One Photographer's Playful Journey Through 25 Historic Sites in France Take a moment, if you will, and enjoy these fantastical photos of France through the eyes of photographer . She first caught our attention back in December 2010, with her series , where beautiful young women were seemingly floating away while they were sound asleep.

The French photographer is now debuting a brand new series called ImagineFrance, at  in New York from May 8 to May 24. For 66 days, Flore and her partner Jeremy Joseph traveled around France, exploring one end of the country to the other. She visited 25 sites including castles, museums, churches and parks, all of which became her stage.

When asked how this project came about, Flore told us, "This was a commissioned project by Atout France and Institut Français, arranged by my agency, Agence VU. I was asked to visit monuments with a contemporary point of view and then exhibit them abroad until 2017. The project started in July 2013. I traveled with my partner and the artist of the videos, Jeremy Joseph, during two and half month. We covered 5,600 kilometers, photographed the 25 monuments and enjoyed our summer by creating stories every day.

"We discovered new cities and monuments and we had to create our own stories about them. We spent time in museums that were empty! We enjoyed having an entire castle to ourselves starting at 7am to see the sun come up. That seems crazy when I write about that today. "

Through her playfulness and witty sense of humor we get to see France like we've never seen before. Flore injects a subtle sense of surprise and surrealism into each shot. Make sure to read the intriguing, behind-the-scenes stories that accompany each image, written by independent art critic Martine Ravache. In the photo above, for instance, which features the Garden of Versailles, Ravache writes, "At Versailles, there is masterpiece upon masterpiece. In gardens designed by Le Nôtre nestle small rooms of greenery with fountains at their center. 'I was charmed by this space, hidden, yet full of openings that play tricks on the eye, see without being seen and vice versa,' said Maia Flore." The Water Mirror, Bordeaux
Since July 2006, Bordeaux has had the largest water mirror in the world (3,450 m2), the creation of architect Michel Corajoud. It is an extremely popular place to relax on the banks of the Garonne. Children play in swimsuits, the adults have picnics and in the evening, it reflects the lights of the city. “It is not a monument like the others,” said Maia Flore. It comes to life. Regularly, jets of vapor plunge the silhouettes into a fog, obscuring even the red dress of the artist. The MuCEM, Marseille
The museum, which opens onto the Mediterranean, was inaugurated in June 2013. It serves as a bridge across time, seas, and peoples, full of a strong symbolism. Maia Flore there creates a moment of spontaneity, where the human element communicates with the space and the reflections, walking on the water and enjoying the energy of this beautifully sunny place. The Royal Château de Blois
As a former residence of seven kings and nine queens of France, Blois symbolizes court life during the Renaissance. Adjacent to the queen’s chamber is the study (or studiolo). Behind the wooden panels of the room once lurked works of arts and other treasures, but freed from the weight of history and alone for a few hours, Maia Flore “invents simple stories in an ornate decor, covered in gold and Fleurs de lys, where even the bed has been engraved.” 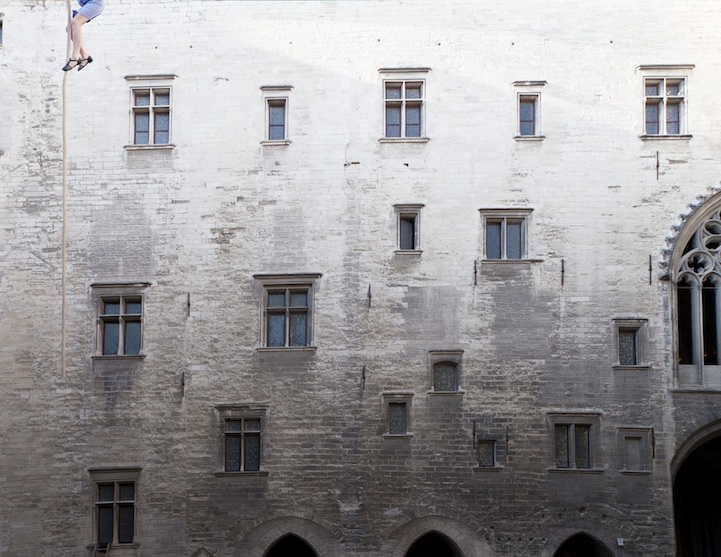 The Palais de Papes, Avignon
An imposing fortress and magnificent palace, the Papal Palace is the largest Gothic building in the world (equal in volume to four cathedrals) and stands as a symbol of the Church’s power and influence of the Church in the West at the end of the Middle Ages. “The walls are so high that your instict from anywhere is to lift your head and look for the sky. The sun barely penetrates the court. Some walls are windowless. I liked this one where the windows, though austere, create, in a very modern fashion, a seductively repetitive aesthetic,” said Maia Flore. The Château du Clos-Lucé
Leonardo da Vinci, a guest of King Francis I, discovered the Clos Lucé in 1516, after crossing Italy and France on the back of his mule. He spent the last three years of his life there as “premier painter, engineer and architect of the King,” during which his artistic influence definitively ushered in the French Renaissance. Taking refuge in the teacher’s shadow, the two young artists decided to experiment with some of his inventions. “I felt like Leonardo da Vinci gave us carte blanche and wouldn’t deny me any initiative.” Gare Saint Sauveur, Lille, lille3000
The former freight station was transformed into a contemporary art venue for lille3000, a highlight of the city’s cultural life. Always moving towards the next destination, the station momentarily becomes the workshop of which Maia Flore only dreams. “In this empty space, I can create my own show;” a show where a future traveler may emerge from the painting as he waits for the train. Château de Thoiry
A few kilometers from Paris, visiting the park that surrounds the castle of Thoiry by car allows you to meet some of the exotic animals out of 104 species that live in semi-freedom. The grounds of the African Reserve at the Château offer an environment that is as rich as the wildlife itself. Inside the walls of the castle, “light enters everywhere,” remarks Maia Flore. The castle is a rare example of esoteric Renaissance architecture. Designed by Philibert de l’Orme, it was built to be a transparent bridge of light, where, following the solstices, the sun rises or sets in the central arch. Everything has been designed in function of the magic of light, establishing a link between the castle and the sun’s path, a heavenly place for photography or for the public to simply enjoy the beauty of nature. Pic du Midi
At an altitude of 2,877 meters, the Pic du Midi has a panoramic view of the Pyrenean summits. At 7 p.m. the waltz of cable cars and tourists stops, and space and time no longer have anything to do with life on earth. Maia Flore appears to touch the stars that seem closer than usual and meets the rings of Saturn. “It’s like your own castle in the sky,” she said of the experience at the top. The Thermes du Mont-Dore, Auvergne
Set at an altitude of 1,050 meters in the heart of Auvergne, the baths have existed since Roman times, built around the sulfurous thermal springs. The Neo-Byzantine style of architecture and decor reflect their rich past. In the waiting room, the balloons arranged by Maia Flore give an idea of the magnitude of the space but the playful seesaw into which the artist integrates them makes you want to smile and brings you back to a more intimate dimension. 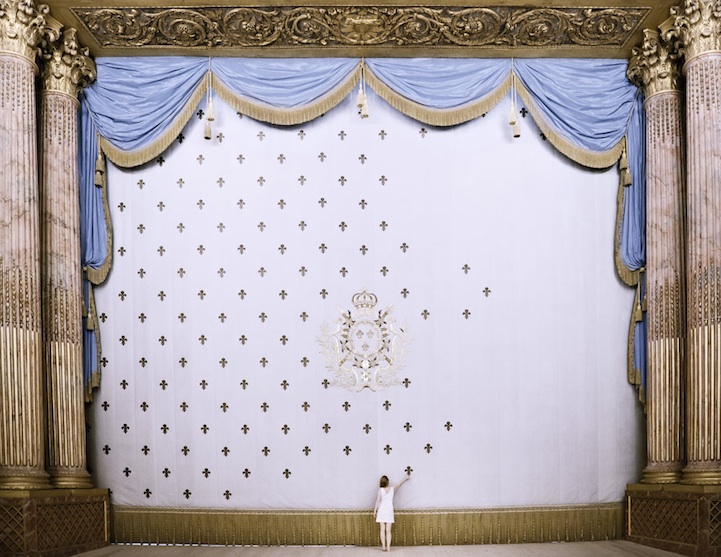 Opera Royal of Versailles
At Versailles, there is masterpiece upon masterpiece. In gardens designed by Le Nôtre nestle small rooms of greenery with fountains at their center. “I was charmed by this space, hidden, yet full of openings that play tricks on the eye, see without being seen and vice versa,” said Maia Flore. At Versailles, on the stage of the most beautiful theater in the world, like a young girl, she plays mischievously with the Fleurs de lys. 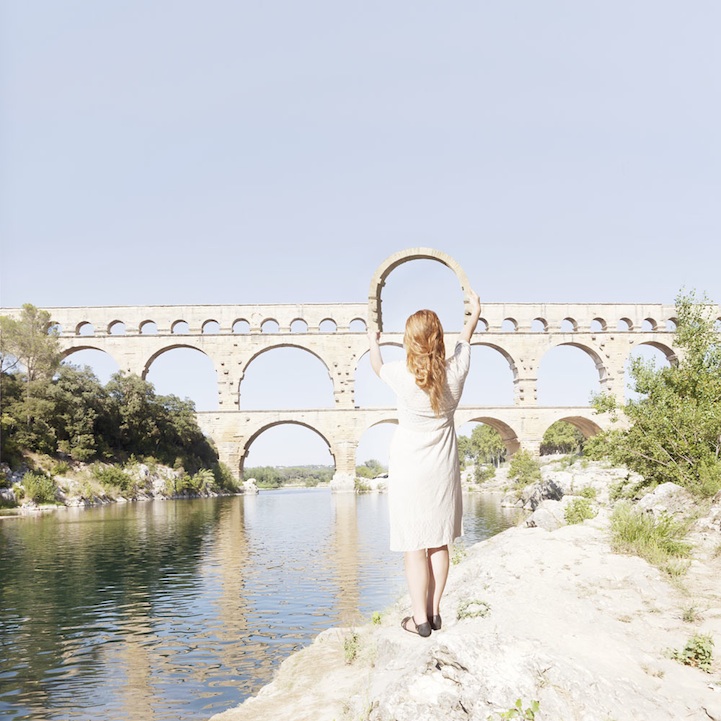 The Pont du Gard
The highest Roman aqueduct in the world, built around 50 AD, is not just a great piece of architecture. It is also an ethereal place on the banks of a wild river, where visitors come to sit in the sun. In the southern light, surrounded by the Mediterranean vegetation, the most-visited ancient monument in France blends into the landscape to the point that it seems almost “natural” itself. “What can I add to such perfection?” questioned Maia Flore. 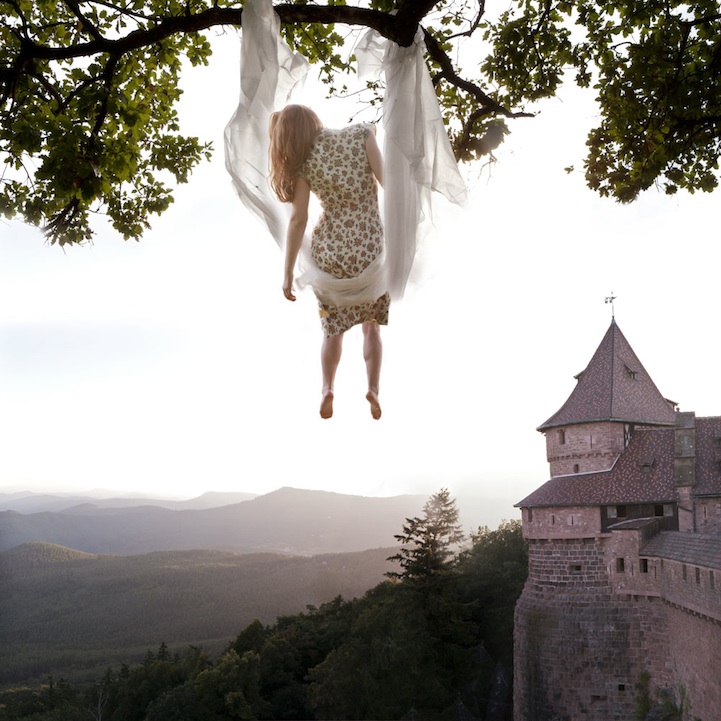 Château du Haut-Koenigsbourg
The medieval fortress overlooks all of Alsace from its highest point, visible from afar. This is a real medieval castle, like the ones in children’s games, with a dungeon, a drawbridge, and a room for weapons and armor. It could also very well be a dark and foreboding castle like those described in the Grimm fairytales, but Maia Flore affectionately nicknamed it “the wedding cake” or “the cherry on top.” The Citadel of Besançon
One of Vauban’s masterpieces, and a World Heritage Site, the Citadel of Besançon towers over the old city by more than 100 meters. Tucked into a bend of the Doubs River, it offers visitors a multitude of breathtaking panoramas. Perched at the top of the ramparts, resembling the queen in a game of chess, it is the artist who is seen from afar thanks to her long golden train. This composition by Maia Flore was inspired by a legend according to which Louis XIV, surprised by the high cost of the fortress’ construction, asked Vauban if the walls were made of gold. The Cité of Carcassonne
Set as a crown above Aude, with 52 towers and 3 km of ramparts, the Cité is the largest medieval site in Europe. Faced with this enormity, the photographer has no choice but to play with the sky, which provides an ideal setting for migrating starlings, or to change the order of magnitude as with this ladder, which in order to reach the roof, should in fact be at least three to four times larger. The Palais de Papes, Avignon
An imposing fortress and magnificent palace, the Papal Palace is the largest Gothic building in the world (equal in volume to four cathedrals) and stands as a symbol of the Church’s power and influence of the Church in the West at the end of the Middle Ages.

+M.Tariq Malik added a discussion to the group EDU302 Human Development and Learning