Silkworms also known as domesticated silk moth and Bombyx Mori ('Silkworm of the Mulberry Tree' in Latin), is the insect from which silk is produced. One of the first products in the world to get the 'Made in China' tag is silk! Silk has been cultivated in China, since ancient times and traded world wide since then. Chinese people are smart and they know how to create a business out of any product and they have only been getting better at it. 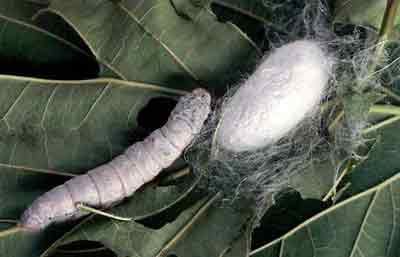 The biological classification of the silkworm is made as follows:
Kingdom: Animalia (as it is a multi-cellular eukaryotic organism)
Phylum: Arthropoda (as they are invertebrate organisms with appendages and exoskeleton)
Class: Insecta (as they have a three part body, compound eyes and antennae)
Order: Lepidoptera (as it undergoes complete metamorphosis, going through a four stage life cycle)
Family: Bombycidae (as it shows all the characteristics of the Moth family)
Genus: Bombyx (as it is a mulberry silk moth)

Silkworm Facts
These facts about silkworms are classified according to various points related to the silkworm's life cycle, silkworm habitat and various uses of silkworms.

Life Cycle
The silkworm life cycle goes through the larva-cocoon-moth stages, which are typical of most moth like insects. Here are some interesting facts about silkworms and their life cycle.
The silkworm eggs, laid out about 300 to 400 at a time, generally take about ten days to hatch. Once the eggs hatch, the larvae or bay silkworms eat incessantly and are always famished!
They prefer eating white Mulberry tree leaves, as they have an attraction for the mulberry oderant called cis-jamone. They feed on all varieties of the mulberry tree.

The silkworm larvae undergo a shedding of skin four times in a row. After the fourth shedding, the bodies of larvae turn slightly yellow and skin becomes tighter. This stage is the precursor of the 'Cocoon' stage.
The larvae go into the motionless pupal state, after enclosing themselves in an envelope of raw silk, produced by their salivary glands. It is in this stage that silk is extracted from them. If left undisturbed, the cocoon is eventually broken and a young adult moth emerges out of it, ready to take on the world!
If the raw silk of a single cocoon is unfolded, it will contains raw silk thread of about 300 to 900 meters in length! That is from a single cocoon! The raw silk fibers, which are about 10 micrometers in diameter are very lustrous and fine. To make one pound of silk, about 3000 cocoons are boiled in water. This kills the silkworms and makes the extraction of silk easier.
The adult silk moth cannot fly!

Uses
Here are some facts about the uses of silkworms.
The primary use of silkworms is in the production of silk. Every year, 70 million pounds of raw silk is produced, after about 10 billion pounds of mulberry trees are consumed by the silkworm larvae!
The length of the 70 million pound fabric can easily cover about 300 round trips to the Sun!
Silkworms are a part of cuisine in both Koreas and China. A snack food called beondegi, made from boiled and seasoned silkworm pupae is very popular. Chinese like eating roasted silkworm pupae.
Read more at Buzzle:

Amir Saleem replied to +M.Tariq Malik's discussion VU Students Reserves The Right to Delete Any Profile On the Site
1 hour ago