Inspired by a similar blog post about 10 Magnificent trees that has been widely propagated around the blogsphere I decided to put together my own list of great trees of renown that I believe is more accurate than the above mentioned post. I had a hard time keeping the list to ten and ended up expanding it to twelve with some runner-up trees by category. At the end of the post I also mention some more truly great trees that did not make the list. The General Sherman Tree is the largest tree by volume in the world and one of the fastest growing. It belongs to the species Sequoiadendron giganteum. Coastal Redwood Portrait, originally uploaded by KbH.
The Coastal Redwood (Sequoia Sempervirens) is the tallest tree species in the world. The tallest actual tree is the Hyperion tree which stands at 379 feet tall. Another Tall Coastal Redwood is the Stratosphere Giant at 112 meters.
Largest Spread - The Great Banyan (Bengal Fig) Great banyan tree, originally uploaded by YamezA.
a sign by this tree reads...

"The Great Banyan Tree is one of the greatest attractions and landmark of Indian Botanic Garden. The tree, Ficus Benghalensis-L. (family Moraceae) is more than 250 years old and spreaded over an area of about 1.5 hectares with about 2880 proproots.
A wonder in the plant kingdom, the tree occupies its possition in the "Guinness Book of World Records" 21.02.05" Although the main trunk of the is tree was removed in 1925 it continues to grow outward and has spread past the fence that was built around it. The highest branch is 24.5 meters tall and the canopy extends over 420 meters in diameter. The "Arbol del Tule", a Montezuma cypress (Taxodium mucronatum), is claimed to be the tree with the largest diameter in the world. At 11.62 meters its diameter is greater than that of the largest Sequoia tree. The Tule tree is located in Oaxaca, Mexico and is claimed to locals to be the largest tree in the world (by volume and tonnage) although this claim is not scientifically proven. None the less it is a very impressive tree! 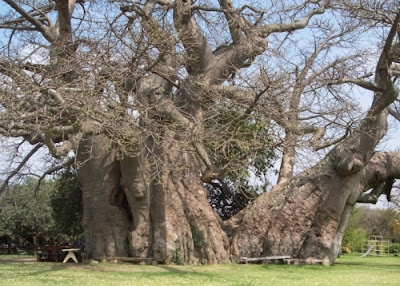 "Big Baobab Tree (Adansonia digitata): This giant and ancient baobab at the Sunland Nursery, between Duiwelskloof and Ga-Kgapane, is the biggest specimen in the world. It has a circumference of 46,8m and carbon dating has determined its age at an astronomical 6000 years." from http://www.places.co.za/html/tzaneen.html

"When baobabs become a thousand years old, they begin to hollow inside. In the Big Baobab this has resulted in wonderful caverns and caves, where the world famous Baobab Tree Bar and Wine Cellar now amaze visitors. The tree bar can accommodate more than 60 people!"
from http://www.bigbaobab.co.za/ 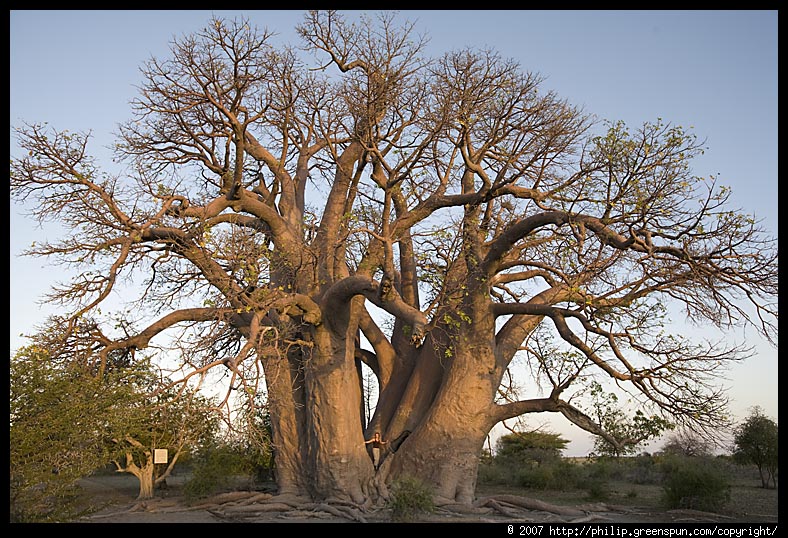 In Botswana´s Kalarari Desert near the Makgadikgadi Pans (once a very immense inland lake in Africa) is a very large tree that goes by the name “Chapman´s Baobab”. In was named by a South African explorer by the name of James Chapman in 1861 when he was on an expedition with his brother and Thomas Baines. This tree is about 25 meters in circumference at its base (Baobab trees swell with water when it rains which makes trunk measurements difficult as they very from season to season). From what I have found I think that this is the second largest Baobab after the “Sunland Baobab in Limpopo which has a circumference of 46.8 meters.The tree is reputed to be between 4,000 and 6,000 years old.

here is the same tree from another angle... The Pando tree is a "clonal colony" which means that this whole grove is one living organism that sends up multiple "stems". Each of what we would consider one "tree" is just a part of this giant living organism. These individual "stems" sprout grow to maturity and eventually age and die and fall over but the organism that they are a part of lives on. The largest known clonal colony is this forest of quacking aspens in Colorado that is estimated to have 40,000 stems and to be as old as 80,000 years.

Sri Maha Bodhi, Anuradhapura, originally uploaded by get down.
Most Resistant tree - "The Tree of Life" The famous Tree of Life, originally uploaded by solvo.
Out in the middle of a vast desert in Bahrain there stands a tree that is popularly called the "Tree of Life". It is a solitary splash of green in a vast ocean of sand. It is believed to be a 400 year old "Mesquite"(??) tree and is located about 2 kilometers from Jebel Dukhan. According to local legend this tree stands in the exact spot of the Biblical garden of eden.
Here is a picture of this tree as seen from Space... 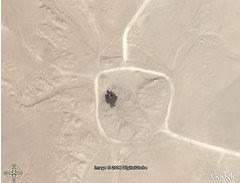 Most Important in History - Cedar of Lebanon A cedar of Lebanon, originally uploaded by CharlesFred.
This large Lebanese cedar tree stands on Mount Lebanon and is a fine example of the tree that is the symbol and pride of the country. This tree species (Cedrus Libani) should not be confused however with what are commonly called “Cedar” trees in the United States. The Cedars of Lebanon have been trees of renown for thousands of years. The wood of this tree was used by Solomon in the construction of the temple that he built in Jerusalem.
Greatest "Living Fossil" tree - Dragon tree The dragon tree at Icod, originally uploaded by 126 Club.
I had the good fortune to be able to visit this increadible tree back in 1994. They say that this tree (Draceana draco) is over 1000 years old. It is located in the Canary Islands, on the Island of Tenerife in the town of Icod. These Dragon trees (sometimes called Dragon's blood trees for the red color of their sap) grow wild only in the Canary Islands but have been planted in many other places such as California, Australia, Spain, etc. (in places where the temps don't go sub freezing).