There are many parts in the world where one wouldn't want to pay a visit to and one such place in the world that dreads the lives of many is the Bermuda Triangle. Known as haunted and an evil triangle , the Bermuda Triangle however keeps you away from the outside world.
Triangle will make actually make one shiver, so here below are some of the weirdest and true stories about the evil triangle which covers around 7 large islands and 150 smaller islands with clusters of coral.

2.It is also said that the strange fact about the Bermuda Triangle started as early in the year 1943, where a number of ship disappeared not accounting to any of the natural disasters or oil leaks. Most of the ships are not to be found under the ocean too, thus leaving us wonder what exactly happened. 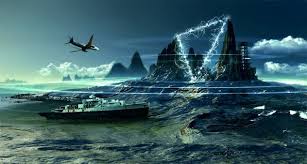 3.The fact about the Bermuda Triangle leaves us surprised because from the time of Christopher Columbus till today the compass does not read. However, if there is any movement of the compass , it shows wrong directions therefore leaving anyone lost at sea. It was also said that when Christopher Columbus ventured into this region he came across strange light and white water which was also noted when the Flight 19 crashed.