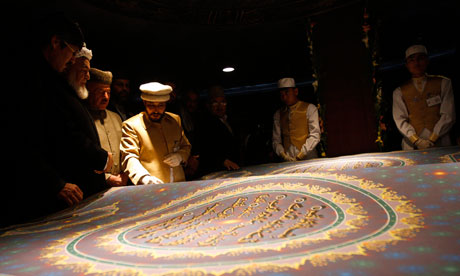 A calligrapher worked for five years to create the world's biggest Qur'an in a bid to show the world that Afghanistan's rich cultural heritage and traditions have been damaged but not destroyed by 30 years of war, it has been revealed.

The lavish book, with pages measuring 2.28 metres by 1.55 metres, has been certified as the world's largest by the Afghan ministry of Haj and religious affairs, according to the Kabul cultural centre that houses it.

The previous claim to the title was for a copy unveiled last year in Russia's Tatarstan region.

The Afghan Qur'an weighs 500kg and its 218 pages of cloth and paper, bound inside an embossed leather cover made from the skins of 21 goats, cost over £300,000 to create.

Mohammad Sabir Khedri, the master calligrapher behind the project, worked with nine students on a design that combines gold script with millions of tiny colourful dots, forming highly symbolic decorations around the giant pages.

"I wanted to use as many tasteful colours as possible to make this holy book look beautiful," he said, standing beside his enormous creation in a room built specially to house it.

Khedri not only created the masterpiece, he managed to keep it a secret for over two years. It was finished in 2009, but the binding and room to house it were not ready until the start of 2012, when it was finally unveiled.

The Qur'an is housed in a cultural centre originally founded in the 1980s, and once home to 50,000 books, a medical centre, and schools for Afghan crafts such as carpet weaving.

All of that was destroyed during the civil war that followed the 1989 withdrawal of Soviet troops, and the harsh Taliban rule from 1996.

But its founder revived the centre after the 2001 ousting of the hardline government, and his daughter – member of parliament Farkhunda Zahra Naderi – now also helps support its work and manages a much smaller library.

"The cultural centre is proud that it provided this opportunity for an Afghan artist to actually show his talent to the world … We have Afghan people who show the positive aspect of Islam," Naderi told Reuters.

The giant Qur'an was her father's dream and a project he devoted himself to for years, Naderi said.

"Writing the Qur'an is a privilege, and … of course if you can make the biggest Qur'an everyone wants to do it, because they want to show the feeling they have, the biggest feeling inside their heart," Naderi said of the project.

But as a devout Muslim, Khedri said he would welcome ceding his moment in the spotlight to an even larger Qur'an made by someone else.

"I will be happier if someone else makes a bigger Qur'an. It is serving Islam," he said with a smile.

May Allah gives you gr8 Ager for sharing this precious information

Mani updated their profile
29 minutes ago