A 116-year-old woman listed by Guinness World Records as the oldest living person died on Tuesday in a nursing home in Georgia.

Besse Cooper died peacefully at the Park Place nursing home in Monroe, Georgia, according to her son Sidney Cooper.

"She looked real good when she passed away," the 77-year-old Cooper told Reuters, saying his mother died quietly and without suffering. 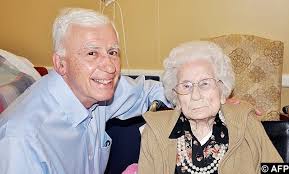 "She got up this morning, had a big old breakfast and got her hair fixed," he said. "It's just like she got up planning to do it."

He said his mother, who taught school until her first child was born in 1929, had four children. All of them survived her and are still in good health, he said.

"She lived in three centuries. Don't many people do that," said Cooper. He added that his mother died after a brief bout of breathing trouble that put her back in bed after lunch.

Sidney Cooper said his mother was a strong, determined woman who, like the school teacher she was, could be a disciplinarian.

She was fair and honest, he said, but "when she said something needed to be done, you'd better do it."

Besse Cooper was born in Sullivan County, Tennessee, on August 26, 1896. She began to go to school at age 5 — yes, she walked from a log cabin — to make sure one of her brothers attended. She grew to love going to class and eventually went to East Tennessee Normal School (now East Tennessee State University) in Johnson City to study education.

When she graduated, she got a job earning $35 a month. When she heard from a friend she could make more in Georgia, she got a job in Monroe making twice as much.

Sidney Cooper said his mother always said her best years were when she was in her 80s.

He said he would always remember her with her straw hat on, working in the flower garden, scratching weeds away with her hoe. She always had fresh-cut flowers in her home, and in her later years, her family would bring some to her room.

She also loved to watch the news on television, her son said.

"She was very intelligent," Sidney Cooper said. "She loved to read."

Her eyesight had deteriorated, though, and she no longer read the Bible or any of the great works of fiction.

Aside from a few heart issues, she was in "amazing" health, her son said, adding that she never complained of pain even in her final days.

As for her voting record, Besse Cooper didn't vote this year. Neither she nor her husband voted in 1948. They thought Thomas Dewey was a shoo-in.

Besse Cooper was certified as the world's oldest person by Guinness World Records in January 2011.